The lung capacity of schoolchildren in some London boroughs is being reduced through living by and going to schools near main roads, according to initial findings of  ongoing Low Emission Zone research .

The early indication of some of the findings relating to lung capacity in research work currently being undertaken by the Lung Biology Group of the Environmental Research Group at King’s College London, was given at last weekend’s air pollution conference “Cities for Clean Air, London 2012”.

Dr Ian Mudway, MRC-HPA, explained at the event that the Kings College study involved conducting health assessments in 8-9 year-old children at selected schools in the London boroughs of Tower Hamlets and Hackney. 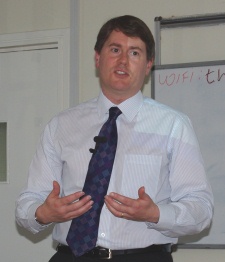 Dr Mudway said research was continuing and that it was noticeable how many children and their families lived less than 500 metres from a main road and that in terms of their schools, “some of these schools are snap bang on busy roads.”

And, highlighting the impact of air pollution, he said: “We are already seeing evidence that children after four years of the study are having a lower lung capacity. Work is ongoing at the moment.”

Study work includes the analysis of walking to school journeys with researchers taking the same routes as the children and measuring air quality. One result of this research may be that different walk to school routes are suggested. Dr Mudway explained: “Providing people with short term meaasures to reduce exposure while dealing with policy issues can help.”

Earlier at the event, which was held at University London Union on July 14, Dr Mudway had warned of the seriousness of the air pollution problem within the capital. “There is an inversion level of NO2 over the city and it  is visible. We are living in a traffic-derived soup.”

And, while he said that many pollutants had gone down in the UK since the smogs of 1952, air pollution still an impact. This was often, he explained, through a general impact on health and in particular other conditions: “People have an increasing level of other systems, asthma attacks, lung function changes and doctor visits. I guarantee that coming in on the tube today my lungs will be inflamed. Poor air quality can be life shortening for some people, causing premature ageing of the cardio vascular system, the lung system. These people should not be forgotten.”

[…] and children are some of the first to suffer. Research by King’s College London suggests the lung capacity of youngsters living in London has been reduced by living or going to school near main roads. These children have […]

I find this information really fascinating and of great concern. In relation to this topic, I am very concerned about the continuing deployment of buses on Oxford Street since I became a bus driver 3 years ago after 25 years as a professional designer. For my first year I was assigned to the ARRIVA garage in Brixton, regularly driving the 159 and 137 routes into and through Oxford Street. It shocked me that buses were forced to ‘compete’ with pedestrians and cyclists. This should be made a total pedestrian zone. There is no need for buses along this road. On… Read more »

You can see the You Tube video of Dr Ian Mudway’s talk here: http://www.youtube.com/watch?v=JuVUYJrXd50

Or see his slides (with audio) on Slideshare: http://www.slideshare.net/CleanAirUK/ian-mudwaynetworkforclean-airism

Andrew, Network for Clean Air, and organiser of ‘Cities for Clean Air : London 2012’ from where this article is sourced.