Delays to the completion of a hydrogen fuelling station at Heathrow airport have meant that London’s Hydrogen taxi fleet has had to make a 130-mile round trip to refuel at a site in Swindon.

The Mayor of London’s office was handed the keys to the five taxis last month – with the fleet set to be used to transport VIPs around the Olympic venues to demonstrate the viability of hydrogen fuel cell technology as an alternative to diesel (see AirQualityNews story). 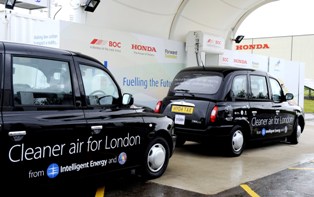 The vehicles, provided by Hydrogen Transport for European Cities (HyTEC) have a 250-mile driving range releasing only water vapour into the air.

It had been hoped that the cabs would be refuelled at one of two charging stations in the city, but due to the pre-arranged closure of the Stratford charging point for London’s hydrogen bus fleet and delays to the completion of a planned charging point at Heathrow Airport the taxis have had to be transported to a station in Swindon, operated by gas supplier BOC.

The Heathrow charging station had been expected to be operational by the start of the Games, but due to delays in commissioning, the station has not been able to open until yesterday (August 2).

The hydrogen bus charging point in Stratford has had to be closed down throughout the duration of the Games, after concerns raised by organisers of the London 2012 Games over storing hydrogen fuel near to the Olympics site. As a result of the site’s closure, London’s hydrogen bus fleet will be out of service until September.

The taxis were transported by a diesel fuelled flatbed lorry to the BOC site in Wiltshire although the operators of the vehicles were keen to stress that this was a one off measure, and refuelling is now taking place at the Heathrow station.

HYTEC co-ordinator Diana Raine said: “The fuelling at Swindon was a one-off. The new fuelling station at Heathrow is now operational and the taxis have been fuelled and driven into central London to pick up the Olympic VIPs, as part of a three-year project to develop hydrogen technology.”

The Swindon site, run by BOC in partnership with vehicle manufacturer Honda, is the first public-access hydrogen refuelling station in the UK and the first to be able to refuel at both 350 and 700 bar pressures, the two global standards for hydrogen vehicles.