Nitrogen dioxide levels in several areas across Greater London are already many times above Government annual limits for 2013, according to air quality monitoring statistics released by King’s College London.

The UK legal limit for annual mean nitrogen dioxide levels is 40 micrograms per cubic metre (ug/m3) – a limit that was first put in place in 2005. 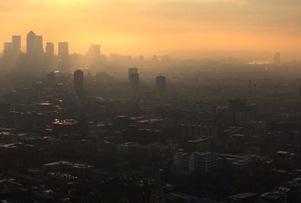 However, annual mean levels of the pollutant so far in 2013 have far exceeded this at 62 monitoring stations in London boroughs, including Brent, Wandsworth, Ealing, Camden and Westminster.

Inhalation of nitrogen dioxide can impact sufferers of heart problems and asthma. It can also cause respiratory problems such as wheezing, coughing, colds, flu and bronchitis.

Commenting on the figures, a spokeswoman for the Defra said: “We want to keep improving air quality and reduce the impact it can have on human health and the environment. Our air quality has improved significantly in recent decades and is now generally very good, and almost all of the UK meets EU air quality limits for all pollutants.”

She continued: “London, like many of our big cities, is one of the limited areas where air pollution remains an issue. However, air quality plans, outline all the important work being done at national, regional and local level will ensure we meet EU limits as soon as possible.”

The Department for and Environment, Food and Rural Affairs (Defra) recently awarded £2 million of funding to projects at 36 local authorities across England to tackle air pollution, including London boroughs such as Wandsworth, Westminster, Ealing and Camden (see airqualitynews.com story).

Some of the highest levels of nitrogen dioxide in London have been monitored on Putney High Street, Wandsworth, where the annual mean for 2013 so far has reached 154 ug/m3 – nearly four times the legal limit. Another monitoring station, Putney High Street Façade, monitored levels of the pollutant at 133 ug/m3.

A spokesman for Wandsworth borough council said that Putney High Street was “an acute problem” because it is a very busy road next to the borough’s only river crossing on Putney Bridge. He said that the council had carried out its own study before Christmas which had pinpointed that more than two thirds of emissions on the road came from buses.

The spokesman said: “The data we collected pushed Putney right to the front of the queue for green bus funding and TfL has started to replace or upgrade the offending vehicles. We will be tracking the impact on pollution levels very closely in the weeks ahead.

“But this is not a quick fix for the high street’s air quality problem and work is continuing on several fronts to bring the pollution level down.”

He said the council was engaging with businesses on the road and had implemented various measures to tackle the problem, such as installing electric vehicle charging points, planting more trees and expanding cycle hire and car sharing schemes.

A spokeswoman for Brent borough council, where the worst annual mean nitrogen dioxide exceedance has been recorded, said: “The start of the year has seen unusual conditions that have helped increase monitored levels, but it is difficult for us to tackle emissions near to the Ikea monitoring site as it is right next to the busy A406 North Circular road. We looked at Transport for London (TfL) funding to assist with the emissions problems, but they have said ‘no’ to everything we have put on the Air Quality Action Plan.

“If the flow of traffic was smoother on the North Circular, as vehicles are stopping and starting all the time, we would be able to meet annual NOx emissions targets. Unless the traffic lights stay green, emissions are monitored at high levels.”

The spokeswoman said: “In Harlesden we are implementing a new road system that will be ready by 2016. This is part of our Local Implementation Plan (LIP) and Air Quality Action Plan and we believe it will enable us to meet annual NOx emissions targets.”

May 21st. I went for a walk today over Wimbledon Common walking parallel with the main A219. I noticed that there was a strange ‘fruity rotten pear like’ smell on the air. I’m sure there was some strange organic gas in the air. Could this be nitrogen dioxide? ( I thought it was odourless). I have lung problems and whatever it was certainly made me more breathless than usual. I have noticed this smell befor on the air in London and wonder what it is. Can you help?

Have a look at pm10 particulates in Brent and Ealing for 24 and 25 April 2012 exceeding 8 and 10. I would love to know what the readings would be in Hillingdon but surprise, surprise Hillingdon no longer participate in providing the data…!!! It makes me VERY SUSPICIOUS as to WHY….!!!!!!

[…] problem is bigger than Amsterdam’s (not just in congestion terms, bad though that is: air quality is a bigger issue here), so we will have to be more radical. Here’s what I […]

This is like the annual inflation rate being calculated during the January sales. The government and EU air quality limits require a minimum data capture and one week is not enough. Wait until September for this story!

But then it has been raining a lot in the last week, and that should reduce pollution.
But if it hasn’t?