Low Emission Zones (LEZs) “must be part of the answer to air pollution” while also helping to boost economic growth, according to ClientEarth campaigner Maria Arnold.

Speaking at an air pollution conference at University College London this week (April 17), she explained that although LEZs could potentially be difficult to implement they were an effective tool for reducing emissions in urban areas while also contributing to economic growth. 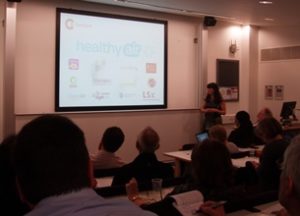 Arnold, who leads ClientEarth’s Healthy Air Campaign, said: “We do feel that Low Emission Zones (LEZs) must be a part of the answer to air pollution. I think that an LEZ as a broad term is a way of making sure high emission vehicles are kept out of city centres.

London is currently the only city in the UK that has a LEZ, and in February the Mayor Boris Johnson also announced proposals for a public consultation on an Ultra-Low Emission Zone in the capital (see airqualitynews.com story), which would see only zero or low emission vehicles driving in central London during working hours.

Mrs Arnold added: “In the future we feel that a national framework for LEZs is the way forward. We think that more progressive industries can be boosted by LEZs rather than go against the economic agenda.”

Her comments came at the Effective Local Action on Air Pollution in London conference, organised by non-profit social enterprise Mapping for Change. The conference featured workshops, talks from air quality scientists as well as a number of speakers involved in campaigns to improve air quality in London (see airqualitynews.com story).

Ms Arnold also said that ClientEarth was still awaiting a judgement on its case against Defra on air quality targets, which was heard at the UK Supreme Court of Justice on March 7 2013. The campaign group had previously said it expected a decision before Easter 2013 (see airqualitynews.com story).

Explaining the possible outcomes from a decision on the case, which could eventually force the government to publish more stringent plans to meet EU air quality targets for 2015, she said: “We could get a referral to the European Court of Justice, which would be very exciting.”

At the day-long appeal hearing at the Supreme Court in March, the Department for Environment, Food and Rural Affairs (Defra) faced accusations from ClientEarth that it has failed to put sufficient measures in place to comply with EU air pollution limits.

Commenting on Defra’s work on air quality, Mrs Arnold told the conference: “The overall issue is that we do not think Defra is not doing very much to tackle air quality. We met with Lord De Mauley [Defra  secretary] in January this year which we found very disappointing as he did not think that air quality fit in with the government’s economic growth agenda.”

She also repeated calls for Defra to send out alerts about poor air quality more widely, adding that while it was helpful to target some alerts towards those most at risk from air pollution, it was important to be clear that poor air quality had health impacts for everyone.

She said: “This is among a range of things we are asking from Defra. We do feel that using the term ‘vulnerable groups’ for targeted alerts undermines the issue a little bit.”

Describing air pollution as a “real blindspot for the health sector”, the ClientEarth campaigner added that it could be difficult to fight for better air quality as it was hard to ask for specific demands.

“We have to get towards that tangible state with air quality where people know exactly what they are asking for,” she said, citing LEZs and cycling facilities and possible single issues to focus on.