Speaking on Friday (June 7) at the close of EU Green Week 2013 in Brussels, Mr Potočnik suggested that more action was needed at EU level to reduce emissions at source and that stricter air quality standards were also necessary. However, Mr Potočnik said that for EU policy to be effective, public awareness of air pollution first needed to increase. 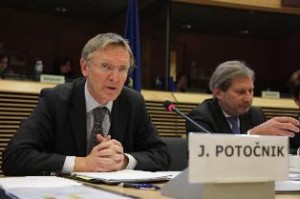 Commenting on the Green Week conference – which this year focused on air quality – he said: “We have learned that public awareness is of key importance for the implementation of existing air policy, as well as for the success of any future air pollution strategy.”

He described some of the work being done across Europe to raise awareness of air quality through the likes of Twitter, smartphone apps, websites, TV weather forecasts and initiatives such as a large balloon in Paris which alerts residents about air pollution.

Mr Potočnik also praised UK science initiatives involving volunteers, such as the Open Air Laboratories Network (OPAL), for helping to raise awareness and said the country could be a model for the rest of Europe in this respect.

OPAL is a Lottery-funded partnership initiative that aims to get the public more involved with nature through a range of projects, including an air survey asking people to look for lichens and fungus on trees to help scientists map air pollution.

However, he said more work was still needed to boost public engagement, highlighting calls at the conference for a “simple EU standard for air pollution – a ‘smog indicator’ – that would further raise awareness about this important issue”.

He said that the debates had provided “an invaluable source of information and a greater understanding of the challenges, which we are already feeding into the final phases of the on-going air policy review and its impact assessment”.

Mr Potočnik said the debates had shown that combatting climate change did not necessarily have to come at the expense of air quality.

“Climate change experts have underlined the need to address air pollution and climate change in parallel, giving priority to black carbon and methane emissions,” he said, adding that here had been calls at the conference for more EU action on methane and ozone.

Highlighting the input from industry representatives during Green Week 2013, the commissioner said that the clean technology industry had called for stricter EU emission limit values for vehicles, as well as retrofitting requirements, improved emission test cycles, and promotion of SULEVs (Super Low Emission Vehicles).
Mr Potočnik said that exhibitions at the conference had shown that “advanced technology for further emission reductions is already available, for most if not all economic sectors”.

He added that the fertiliser industry had called for more incentives to promote low ammonia-emitting fertilisers and higher nutrient use agriculture, adding that he hoped to see “much more progress in the future” in the agriculture sector with regards to air quality.

Finally, Mr Potočnik put forward his hope that next year’s Green Week and 2014 as a whole would focus on creating a sustainable circular economy “that lives in harmony with nature”.

Under the banner ‘Cleaner Air for All’, the 13th the annual Green Week conference on European environmental policy took place between June 4-7, featuring up to 3,000 participants. Opening the event on Tuesday (June 4) Mr Potočnik said there had been an “absolute decoupling” between economic growth and air pollution (see airqualitynews.com story)