Air quality experts and politicians have reacted to the EU’s decision to take the UK to court over its failure to meet standards for nitrogen dioxide, but have questioned whether it would be the UK government or local authorities paying the £300 million fines that could be levied as a result.

Yesterday (February 20), the European Commission announced that it was pursuing legal action against the UK government for breaching limits for nitrogen dioxide in 16 of 43 zones in the country and failing to reduce concentrations by the 2010 deadline (see airqualitynews.com story). 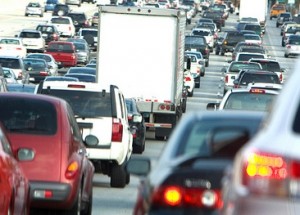 As a result, the UK could face EU fines of up to £300 million for every year that it fails to comply with the air quality standards.

Roger Barrowcliffe, chair of the Institute of Air Quality Management (IAQM) – a membership organisation for air quality professionals – said it was currently unclear who would have to pay such a fine – but that as a result of Local Air Quality Management legislation giving more responsibility to councils, it could be local authorities footing some of the bill.

However, he told airqualitynews.com: “Should the government pass them on to local authorities, this will be very harsh and counterproductive to good local air quality management, which is struggling for resources at local level in any event.”

Mr Barrowcliffe also said he was “surprised” it had taken so long for the Commission to take the decision, but that the government really needed to target road transport emissions if the UK is going to reach compliance for nitrogen dioxide.

And, he was also unimpressed with the Commission’s new package of air quality policies launched in December (see airqualitynews.com story), which he described as “anaemic”.

Mr Barrowcliffe said: “Will the EU’s legal action against the UK make a difference? This gets to the heart of the matter in my view. There is a reasonable basis for thinking that by around 2030 the Euro 6 [vehicle emissions standards] and subsequent standards will have brought compliance just about everywhere with nitrogen dioxide. It is clearly a problem that will be solved in time. It depends whether it is worth the EU spending more money to get there faster.”

He added that the next five years were “really crucial” for nitrogen dioxide emissions as “we will have a much clearer idea of whether the Euro 6 emission standards have delivered.”

However, he did have some sympathy for politicians in charge of air quality. He said: “Is government doing enough? Clearly not because if you define success as lowering concentrations fast enough to meet the limits then no one is doing enough. However, if you put yourself in their position what levers have you got to improve the situation?

“It takes political muscle to put in place LEZs. I think obviously it is clear to most people that you are not going to improve NOx and NO2 unless you really target road transport in cities and towns. Nothing else is really going to deliver. You don’t need to be in air quality management to understand that.”

Mr Barrowcliffe commented: “It will be interesting as we come towards the general election next year how this plays out, if at all, in the political arena.”

Speaking to airqualitynews.com, he said: “I think what we have to remember is that the UK played their part in actually setting the standards back in the late 1990s. Since then they have not really improved things in any meaningful way, and that is a matter of very deep regret for the near 30,000 people a year who are dying because of poor air quality. We should not have set up the standards if we were not prepared to meet them.”

Asked whether he thought the legal action would help improve air quality in the UK, Mr Taylor said: “If the government won’t comply because it is the right thing to do, then perhaps they will if they face a £300 million fine each year.”

But, he added: “I do not want the EU to have to fine the UK, especially because the public have already paid the price in terms of health – it would add insult to injury.

“Quite how they want to discharge the fine I don’t know. There was talk of the fines being paid by the local council which would be totally irresponsible.”

London in particular was singled out as having the highest levels of nitrogen dioxide emissions of any city in Europe, and is not expected to comply with EU standards until 2025 – 15 years later than the EU target of 2010.

Labour London Assembly member Murad Qureshi – who also chairs the Assembly’s health and environment committee – told airqualitynews.com that he thought at least a sizeable part of a possible EU fine would have to be paid by the Mayor of London, “whoever that will be at the time”.

He said: “I would much rather we responded to the public health issue than the fear of facing a £300 million fine. Air pollution is a silent killer of thousands of people and I would like to think that was the reason for dealing with this problem.”

Mr Qureshi said it could potentially be a big political issue at the upcoming EU elections in May 2014.

He said: “The right may say that this is unwarranted from the EU, while those on the left may welcome this environmental intervention. It could be seen as an issue of sovereignty, but the EU really has been leading the way on environmental issues for many years now.”

My Local Authority have put forward a AQAP to DEFRA which basically will not touch the issue of air pollution on my road. They are proposing a massive increase in housing development with no plan to improve the traffic infrastructure. I compiled a report of how the AQMA was not being addressed in compliance with DEFRA instructions, I then find myself being called to the Local Council Offices for a chat. The chat was basically wind your neck in. My real issue is that they have not been monitoring PM 2.5 even though they have in the past (2003,2004) and… Read more »

How true, Mr. Barrowcliffe, the answer is to target road transport in cities – so why then is the Mayor of London so set on building a second Blackwall Tunnel to Silvertown, increasing the already congested roads in Greenwich and Newham.