Air pollution is an ‘endemic problem’ that needs to be addressed urgently at an EU level, the lead MEP candidate for the Green Party said today (April 28).

Speaking to airqualitynews.com at the launch of the Party’s campaign for the upcoming European elections on May 22, Eastern region contender Rupert Read said it was time to ‘toughen up’ on poor air quality across the UK and Europe. 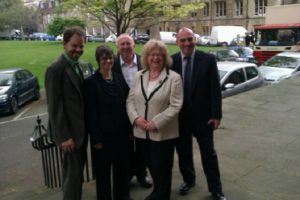 Mr Read also said he was concerned that a major £1.5 billion scheme to ease traffic congestion near Brampton by widening the A14 corridor could breach EU pollution limits. The area has long been been close to or above the legal limit of 40m3 (micrograms per cubic metre) of nitrogen dioxide (see airqualitynews.com story).

He said: “This problem is endemic. We are very concerned that the number of deaths attributed to air pollution each year is now 10 times the amount caused by car accidents.

“Air pollution is a particular scourge around South East schools, while the A14 situation is going to put air quality out of Europe’s hands. It’s not enough to say we are going to sort this out in the future, now is the time to get tough on the causes of air pollution.”

Mr Read made his remarks as the Party officially launched its manifesto for the upcoming European elections this morning, as well as introducing two other candidates at the Church House Conference Centre in London.

The UK will elect 73 MEPs to the European Parliament later next month, across 12 electoral regions containing between three and 10 representatives.

While Ms Bennett emphasised a vote for the Green Party was a vote against ‘fracking and secret trade deals’ favoured by the current administration, the manifesto also promoted the work being done to fight air pollution.

The manifesto states that both Mr Taylor, MEP for the South East, and Ms Lambert, MEP for London, have worked continuously alongside organisations in the UK to call upon the European Commission to investigate breaches of air pollution limits.

Meanwhile, Ms Lambert, who was re-elected Green Party MEP for London in 2009, said: “The next European Parliament will involve really important decision-making and it’s really important which parties are making those decisions. Greens are very serious about our politics and we are serious contenders in this election.”