Global shipping traffic has increased four-fold over the past 20 years, likely contributing to a rise in air pollution on the open seas, according to a US study of satellite data.

Published this week (November 17) in the Geophysical Research Letters journal, the research used satellite data to estimate the number of vessels on the ocean every year between 1992 and 2012. 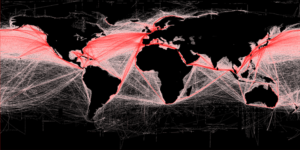 This showed that the number of ships on the oceans grew by 60% between 1992 and 2002, but then grew faster during the second decade of the study, peaking at a rate of increase of 10% per year in 2011.

The study, ‘Anthropogenic pressure on the open ocean: the growth of ship traffic revealed by altimeter data analysis’, claims to be the first to track ship traffic on a global scale.

Maritime traffic went up in every ocean during the 20 years of the study, apart from in Somalia where increasing piracy ‘has almost completely halted commercial shipping since 2006’. In the busy Indian Ocean, on the other hand, ship traffic grew by more than 300%.

And, according to the study, burgeoning ship traffic has increased the amount of pollution in the atmosphere, particularly above the Sri Lanka-Sumatra-China shipping lane, where the study found a 50% increase in nitrogen dioxide between 1992 and 2012.

Published by the American Geophysical Union (AGU), the study puts the rise in traffic down to international trade and an rapid increases in sizes of merchant fleets over the past two decades, adding that ships powered by fossil fuels ‘pump exhaust into the air’ as well as polluting the sea with oil, fuel and waste.

Author of the study, Jean Tournadre of the Laboratoire d’Oceanographie Spatiale in France, said: “I found it quite worrisome that the ship traffic grew so much, even in very remote regions of the world, especially when we know that they are the major source of pollution [on the open ocean].”

However, Tournadre also warned that some of the growth found in ship traffic could be “overestimated because ships, especially container ships, have become larger over the past two decades and possibly easier to detect with altimetry data”.

Last year, a European Environment Agency report found a “substantial increase” in air pollution from shipping in Europe, and described the industry as “one of the most unregulated sources of air pollution” (see airqualitynews.com story).