The coalition government’s record on air quality was called into question this week (March 23) as MPs from four political parties outlined their vision for a ‘greener’ future at a debate in London. 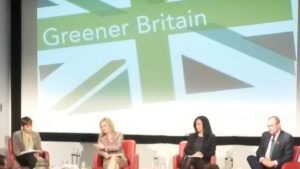 They were speaking at the Greener Britain Hustings event in London, organised by the Green Alliance and chaired by Tom Heap of BBC One’s Countryfile and Radio 4’s Costing the Earth.

On air pollution, Ms Truss –Conservative MP for South West Norfolk – was heckled by audience members as she argued the coalition had invested £2 billion in prevention measures during its five-year term.

She added: “We need to do more but the things in China are extremely stuck.”

But others were less convinced with Ms Lucas arguing that an “office of environmental responsibility” should be set up in response to the department’s failure to act on issues such as climate change and air pollution.

She added that it was “crazy” that air travel in some cases was now “three times” less expensive than rail travel to Europe – adding the culture of low-budget flying would have to be addressed in order to cut greenhouse gas emissions.

Meanwhile, asked how environmental policy would be affected if the UK exited the EU during the next Parliament, Labour’s Ms Flint added it would be “a recipe for disaster”.

She said: “There would be an enormous impact on clean technology investment. I could not think of anything worse than two years of internal wrangling of how we are going to leave the EU in the run up to a referendum.”

However, Ms Truss took an opposing view. “We can take decision making more locally,” she explained. “I would like to see more local decision making within a European framework; 25% of proposals in the Red Tape Challenge were Defra regulations.”

Ms Lucas was also sceptical of the role the EU could play on the environment – suggesting that innovative policies such as Sweden’s recycling refunds for cans and bottles “get in the way” of the EU’s single market economy agenda.

Commenting on the Lib Dem plans for the environment, Mr Davey said his Party had promised even more investment in the Green Investment Bank than Labour.

He went on to champion the ‘five green laws’ in the Lib Dem manifesto – including a Nature Bill for clean air, a Zero Carbon Bill to ban electricity generated from unabated coal, and a Green Transport Bill only allowing low emission vehicles on the roads from 2040.