The government has today (5 May) published its draft Air Quality Plan saying that it aims to “reduce nitrogen dioxide in the UK”.

The Department for Environment, Food and Rural Affairs (DEFRA) said the options now open for consultation on reducing nitrogen dioxide in towns and cities are designed to “reduce the impact of diesel vehicles, and accelerate the move to cleaner transport.”

According to the plan “Tackling poor air quality in all its forms is a priority for Government.” However, while a number of groups have called for a diesel car scrappage scheme, this is not proposed in the consultation although it does feature in a consultation questionnaire and technical report. Diesel cars are highlighted in the draft plan

The publication comes after the government lost its bid to delay the publication of its air quality strategy at a High Court hearing last week (28 April).

Issued as a consultation document, the plan covers England, Scotland, Wales and Northern Ireland and the consultation runs until June 15th.

The reference to scrappage schemes is made in a survey which is running alongside the consultation. In this, the government asks whether “targeted scrappage schemes”, for both cars and vans, could be options to improve air quality.

The technical report published in conjunction with these documents also suggests that the government could consider a scrappage scheme, which would potentially see around 15,000 of the oldest and highest emitting vehicles – 9,000 diesel and 6,000 petrol vehicles – scrapped and replaced with new Battery Electric Vehicles (BEVs) during a one-year period.

In the consultation document, the government outlines a number of measures to reduce emissions from diesel vehicles which will be explored over the next 12 months, such as the “appropriate tax treatment for diesel vehicles”, and ensuring that environmental performance is apparent to consumers when purchasing cars (car fuel efficiency label).

In an effort to reduce diesel emissions further, the document confirmed that in 2017 there will be a consultation on ways to get more take up of alternatively fuelled light commercial vehicles (vans). These will include “increasing the weight limit of alternatively-fuelled vans which can be driven on a category B driving licence in the UK.” 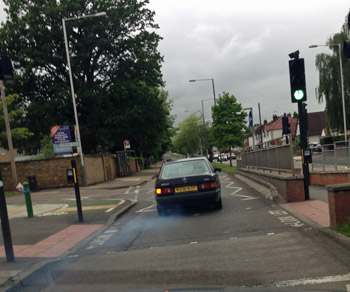 A Scrappage scheme is mentioned in a questionnaire about the plan

And, there will be the review of “appropriate tax treatment” for diesel vehicles and engage with stakeholders ahead of making any tax changes at Autumn Budget 2017.

As well as a focus on reducing emissions from diesel cars, the document states that the government will announce new measures to tackle emissions of NOx from Medium Combustion Plants (MCPs) and generators in mid-2017. These are used to generate heat for large buildings, industrial processes and power generation, which the plan states have been “largely unregulated” and which can lead to “local breaches of the statutory hourly mean limit value for NO2”.

The plan also suggests that the government will give local authorities the opportunity to identify and implement non-charging alternatives to a Clean Air Zone.

According to the plan, with the adoption of a charging scheme, local authorities could achieve statutory NO2 limit values in most cases by 2021, after charging has begun, although the government will press local authorities to deliver Clean Air Zones earlier.

Councils are likely to be pushed to consider retrofitting of transport fleets including buses operating in their areas.

And, DEFRA says it will work with the mayor of London on a number of measures such as phasing out pure diesel buses, retrofitting 5000 older buses, and a commitment to purchase only hybrid or zero-emission double decker buses from 2018.