Bristol’s Mayor has deferred a decision over the establishment of a clean air zone in the centre of the city, in order to seek guidance from the government over the plans.

Bristol is one of 29 authorities identified within the government’s air quality plan as needing to draw up proposals to deal with nitrogen dioxide emissions – with a December 2018 deadline for measures to be brought forward. Four potential options for a clean air zone were put forward ahead of a meeting on Tuesday (15 August), following a feasibility study to provide ‘evidence-based’ options for the future design of air quality measures within the city (see airqualitynews.com story).

The proposals are part of a clean air action plan under development by the city council which is seeking to address emissions from transport and other sources in the city.

The four options were due to be considered at yesterday’s cabinet meeting, where councillors had been expected to approve more detailed investigation into each of the proposals, before settling on a final route by February 2018.

However, during the meeting, the Mayor of Bristol, Marvin Rees, revealed that a decision on the proposals has been pushed back to allow more time to assess the options.

This came following a late intervention by the environmental law firm ClientEarth, which had contacted the city council last week ‘highlighting issues in the formulation of the options’, according to the Mayor.

ClientEarth has claimed that guidance for local authorities on tests that they should apply in drawing up clean air zone proposals ‘have not been made clear enough’.

Speaking during yesterday’s meeting, the Mayor said: “Following the direction issued on 26 July by Defra, and a letter from ClientEarth that highlights issues in relation to how options have been formulated, I have decided to defer the decision on the clean air action plan so that further work can be done on the initial feasibility study.

“We also want to seek clarification and guidance from government on the direction to make sure we have got our approach right. A further report will be brought back to cabinet once this has been done.”

ClientEarth lawyer Anna Heslop, said: “Bristol city council should be applauded for being one of the first local authorities to start to take steps towards fixing the air quality crisis, including looking at charging clean air zones, which the government’s own evidence says are the most effective way to bring down air pollution as soon as possible.”

She added: “It is positive that Bristol city council is seeking to make sure all the details are correct before moving forward, so that the people of Bristol can be assured that their council has taken its decision carefully and correctly.”

ClientEarth, which has led the legal case against the government’s air quality strategy has said that it hopes the council is able to bring forward its proposals for tackling air pollution ‘as soon as possible’. 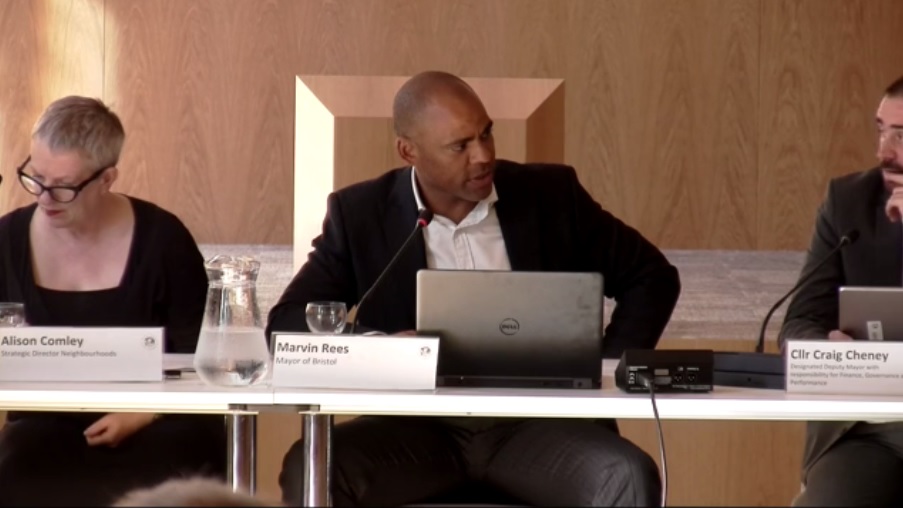 Bristol Mayor Marvin Rees, speaking at the meeting on Tuesday

Funding for the feasibility study into the clean air zone had been secured jointly by Bristol city and South Gloucestershire councils, with a total of £500,000 granted by government to assess issues such as the potential size and location of a clean air zone, and whether charging could be implemented.

Consultancy firm CH2M had weighed up various options for the establishment of a clean air zone in the city, before settling on the four recommended options.

These included two ‘medium sized’ CAZs – one including buses, coaches, taxis, private-hire vehicles, heavy and light goods vehicles, and another covering all vehicles including cars. These would stretch across the entire central area of city as well as major inward arterial routes.

The other options include smaller CAZs covering just the city centre – with one including cars and another covering commercial-type traffic.

The city council is now expected to return with a detailed report on the proposals later in the year following consultation with government.