Alastair Lewis, science director at the National Centre for Atmospheric Science, University of York, writes about how in spite of some clever marketing, air pollution filters may not be the golden bullet for poor air quality.

I recently found myself in the surreal world of the Consumer Electronics Show in Las Vegas discussing the next generation of pollution sensors that one day you might find inside your phone. The exhibits I saw suggested the next big thing in home technology could be anything from intelligent cat litters to internet-enabled teapots, with everything powered by mysterious machine learning and the unfathomable blockchain.

But there was no escaping that air quality and air purification is now a seriously big thing in the consumer products world. Most major white goods manufacturers have a range of products. There are also plenty of start-ups offering new variants – including purifying robots that wander forlornly around your home and bizarre bio-inspired devices that blow air over the leaves of poor unsuspecting houseplants.

If you live in Europe it could be easy to dismiss these as tech gadgets that may never catch on, but that would be badly misjudging the ever-expanding user base for home air filtration that already exists in Asia and beyond. These devices are for sale because people want them, and the market could be worth in excess of US$30 billion per year by 2023.

In some regards, indoor air purification is an individually empowering technology. In a well-sealed home, filtration-based purifiers clearly make a difference and can noticeably reduce concentrations of tiny harmful particles, particularly if the home is somewhere with lots of pollution outdoors, such as central Beijing or Delhi.

The evidence for the removal of harmful gases indoors, including volatile organic compounds from paints and glues, is sketchier. Some systems get the gases to stick to a charcoal-based filter, but there is little independent data that shows these actually work. In other types of purifiers UV radiation is used to accelerate a chemical reaction that turns those gases into carbon dioxide and water. However manufacturers have not yet published data to show that this process doesn’t actually end up converting relatively benign compounds into something more harmful.

Outdoor air filtration demonstrators have so far proved ineffective, simply because the atmosphere is so huge relative to the size of the filtering system. However, indoors, the balance shifts. Homes have internal volumes measured in the hundreds to maybe several thousands of cubic metres and, simply due to natural drafts and leaks, the indoor air is swapped with outdoor air perhaps once per hour. That is still a lot of cubic metres of air to clean, but the maths begins to stack up.

Yet the costs of filtration are possibly larger than they first appear. Most air purifiers use cellulose or polymer membranes that are replaced every month or so, often as part of a regular service contract. The air is pushed through the filters with fans and pumps which use energy, perhaps anywhere between 100 watts (equivalent to a bright lightbulb) and 1000 watts (a microwave), depending on the size of the air cleaner and home.

Poor air quality in this sense then impacts on climate by increasing energy demand in the home and the city, and of course, it adds directly to the user’s electricity bill. The power demands of air filtration are not as great as air cooling, but would potentially run 365 days a year, not just in the summer months. If you add 500 watts of continuous demand to millions of homes, this becomes a big deal. 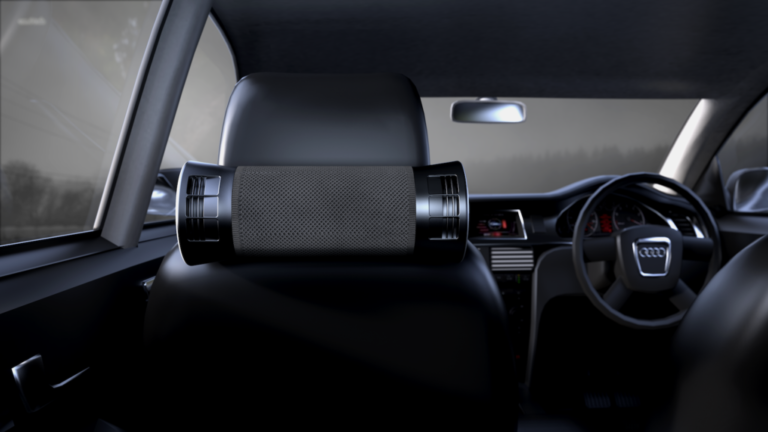 Then there is the elephant in the room. What happens to all those millions of microfiber particle filters or traps full of activated carbon? I asked that question more than 20 times in Las Vegas and the answer was always the same – you put them in the bin.

Should we care? Possibly, yes. Filters in the home that collect particles end up concentrating some rather unpleasant toxic chemicals gathered from air outside – heavy metals from brake wear, polycyclic aromatic compounds from wood and coal fires, nitrosamines from cigarette smoke, the list goes on. A filter may end up holding milligrams (and maybe more) of individual chemicals that were initially found in air at very diluted concentrations, and whose previous fate was probably to deposit as a very thin layer over huge areas of land.

If hundreds of millions of filters from millions of homes are then all dumped in the same few city landfills we double down on the concentration process. Are we simply shifting a problem from the air into a problem of those same chemicals now leaching out into the soil and water? It’s unclear how much thinking has gone into this, or the energy demand consequences should hundreds of millions of people start purifying their own air at home. (Thinking more positively for a moment: perhaps those millions of waste filters would offer someone an opportunity to “mine” the trace metals collected?)

There are some obvious conclusions to be drawn, the most striking being that there is a financial opportunity for someone in every crisis. But this particular solution comes with costs that we haven’t yet well quantified. Air filtration adds electricity demand for sure, it needs raw materials and resources to build, maintain and support and it is possibly creating chemical disposal problems we’ haven’t yet evaluated. It does however reinforce the well-trodden scientific principle that it’s always more efficient to stop pollution at source than try to clean up afterwards.