Global warming is likely to make China’s efforts to manage its air pollution progressively harder, a new study has warned.

The study, published in the Proceedings of the National Academy of Sciences, found that more intense and frequent extreme weather events like heatwaves and stagnant air will increase air pollution exposure across China, causing more people to die as a result.

The findings threaten the worsening of China’s already severe air quality problems, with air pollution currently linked to around 1 million deaths in the country each year.

The authors of the study stressed that climate change and air pollution must be tackled hand in hand if further deaths from air pollution are to be avoided.

‘For Chinese policymakers working to improve current air quality and protect public health, our finding is a daunting conclusion, and one that underscores the need to tackle the challenges of both climate change mitigation and air quality at the same time,’ the authors of the study wrote.

The scientists set out to investigate how climate change would affect air pollution and human health in China by the mid-21st century.

To do this they used a range of climate, air quality and epidemiological models, while assuming that countries will limit global greenhouse gas emissions to keep global temperature rise to around 1.4 degrees Celsius by that time – the scenario outlined in the IPCC’s RCP4.5. 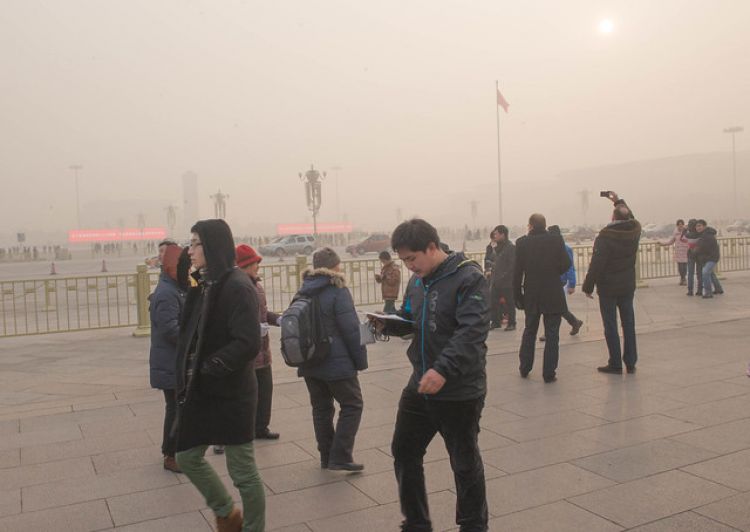 The researchers found that climate change is likely to affect air quality for over 85% of China’s population by the mid-21st century, covering around 55% of China’s land area.

Meanwhile, concentrations of fine particulate matter (PM2.5) and ozone (O3) would increase by 3% and 4% respectively, resulting in around 21,000 additional deaths due to air pollution each year.

The stagnation of China’s atmosphere would be the biggest underlying factor behind this change in air quality, contributing 39% to the increased mortality rate, the scientists found.

‘Our results indicate that climate change and more intense extremes are likely to increase the risk of severe pollution events in China,’ the scientists concluded. ‘Managing air quality in China in a changing climate will thus become more challenging.’

The findings stress the importance of China taking steps to reduce greenhouse gas emissions as well as other pollutants – the country has committed to peak its carbon emissions by 2030.

The study follows other recent studies that draw links between climate change and air pollution, with scientists warning that the combination of the two issues could significantly impact health and global economies.

The UN Environment Programme and the Climate and Clean Air Coalition recently launched a ‘Clean Air Initiative’ calling on governments around the world to align their climate change and air pollution policies by 2030.