David Harrison, a frequent traveller to Nepal, reports on the challenges and opportunities for clean air in the Kathmandu Valley, currently one of the most polluted areas in the world yet set against a backdrop of aesthetically beautiful mountains and wild landscapes.

Arriving at Tribhuvan International Airport in Kathmandu is an assault on the senses.

There is a heady concoction of both sights and sounds as taxi drivers line up patiently in their battered decades-old Nissans and Suzukis, while thick swirls of dust and exhaust fumes hang heavy in the air.

In the peak trekking seasons of April and October, visitors from all over the globe descend on Nepal in search of the natural wilderness of high mountains such as Annapurna, Machapuchare, Ama Dablam and of course Everest. In 2019, 1.17 million tourists entered the country.

The starting point for these adventures is always Kathmandu, a vibrant and densely populated capital city which, along with the neighbouring cities of Bhaktapur and Lalitpur, make up the Kathmandu Valley. The area has a growing population of 2.5 million.

A taxi ride from the airport to one of the tourist hotels proves an adventure in itself, winding through the many narrow streets on mainly dirt roads which are poorly constructed and incredibly dusty.

The causes of poor air quality are evident everywhere. Old motor vehicles, poor road construction, wood-burning fires, back street industries and brick kilns, all of which contribute to significant levels of particulate matter (PM10), (PM2.5), and gaseous pollutants like ozone (O3), nitrogen dioxide (NO2), along with volatile organic compounds like benzene, carbon monoxide (CO) and sulphur dioxide (SO2)

The impact of poor air quality is exacerbated by the natural amphitheatre surrounding the Kathmandu Valley with mountains, ranging from 2000 to 2800m, encircling the urban areas.

Largely protected from any winds, the pollutants are not dispersed and hang heavy over the local population and tourists alike.

The Nepalese are ingenious people. Their ability to keep vehicles operational, whatever the age, is truly remarkable. 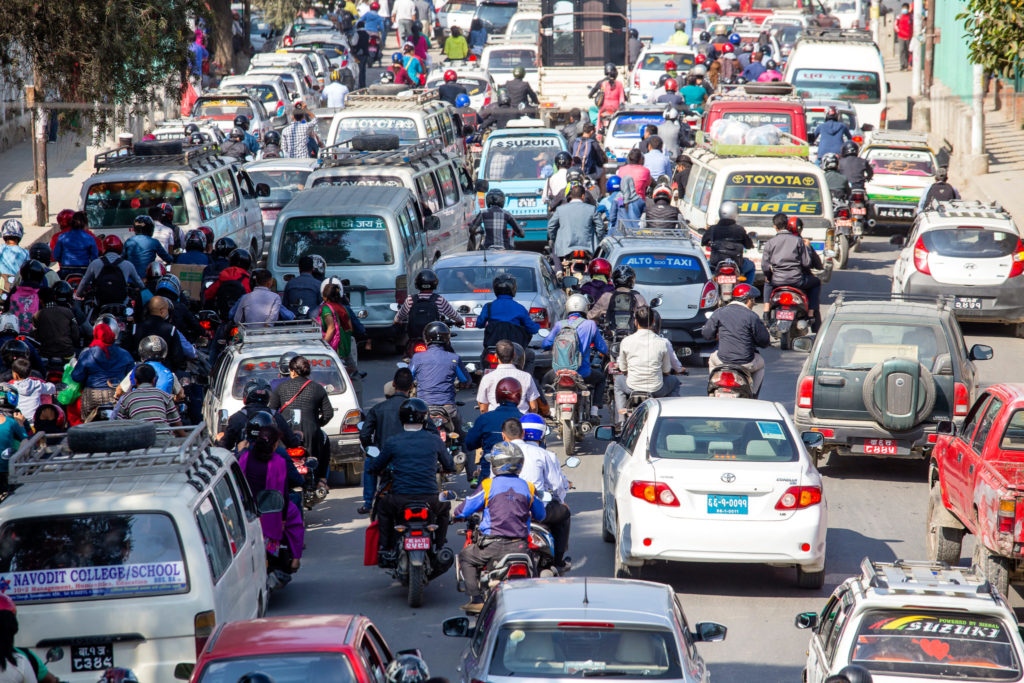 The World Health Organisation (‘WHO’) has reported that PM2.5 levels of particulate matter in urban areas of Nepal often reach up to 140 µg/m3 which is 10 times higher than the desired level.

A significant contributing factor to the poor air quality is the geographical location: as a landlocked country, Nepal is bordered by two industrial powerhouses – China and India. Both of those countries are struggling to manage their own air quality which has serious implications for the Kathmandu Valley and surrounding areas.

In May 2020, in response to a request for recent air quality data, the WHO provided us with data for 2017, in itself an indication of the lack of reliable and current information regarding pollution levels across the country. What the 2017 data did indicate was that some of the highest PM10 levels are recorded in monitoring stations closest to the Indian border (Lumbini).

Major cities in India such as Delhi, Raipur and Gwalior are among the world’s most polluted urban areas. Indeed, Delhi is classed as the most polluted capital city in the world with air pollution levels recorded as 30 times higher than the WHO’s recommended upper limit. To the East is China with cities such as Jingjinji, Beijing and Tianjin having high levels of PM2.5.

With air pollution not respecting international borders, this is a significant problem for the Nepalese government.

In a developing country such as Nepal improving air quality is a massive challenge but the government is developing strategies to meet it.

Perhaps surprisingly, in the 1990s Nepal was even ahead of its time as regards the adoption of EV vehicles. Kathmandu replaced a fleet of 640 Indian diesel-powered, 12-seater buses called Vikram Tempos with a vehicle known as a Safa Tempo which was powered by a lead-acid golf cart battery.

These new electric vehicles delivered emission-free journeys for 100,000 people every day and were supported by 38 charging points.

However, these early, forward-thinking attempts to use EV’s did not catch on: the higher running costs of the Safa Tempo proved a barrier in a country where the average annual income has just passed the $1,000 mark.

When tariff exemptions ended there was a rush to replace the Tempo with 15- seater Toyota diesel microbuses.

For a significant increase in electric vehicles to occur there also needed to be a larger infrastructure of charging points developed. Private owners needed to be re-educated as to the long-term benefits of EV vehicles. Prices remained prohibitively expensive and there was no subsidy scheme and perhaps most importantly there were also regular issues with the reliability of the electricity supply network. 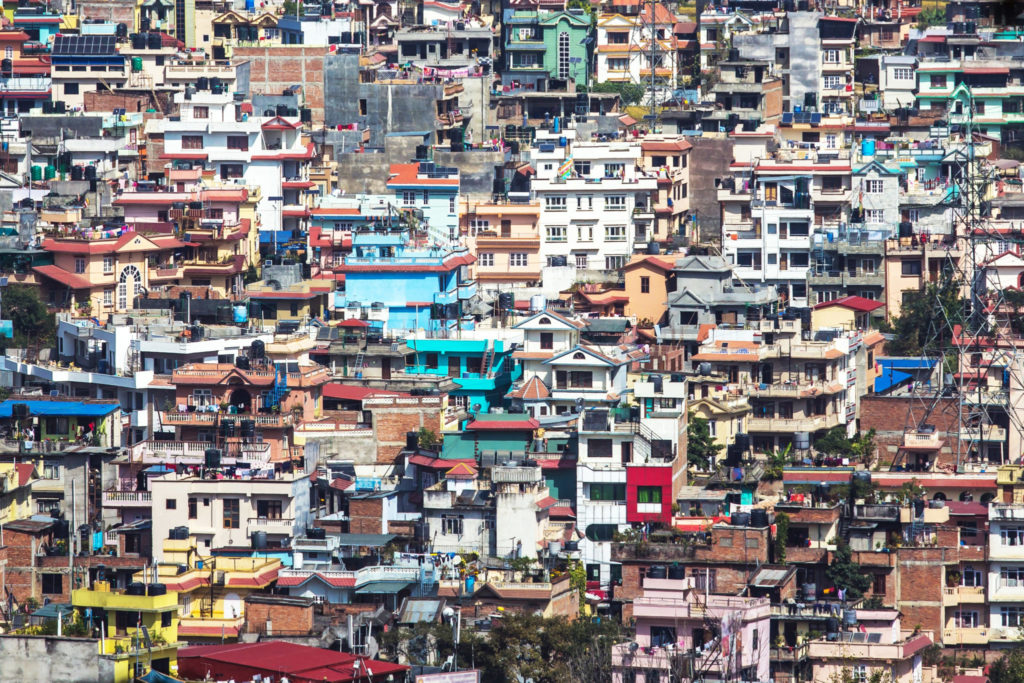 In an attempt to improve air quality in the Kathmandu Valley and across the whole of Nepal the government has created a National Plan for Electric Mobility (NPEM). As part of the NPEM, the government has set out a number of ambitious targets which should have a positive impact on air quality. These include:

• By the end of 2020 to have increased the share of electric vehicles up to 20% from 2010 levels,
• By 2050 to have cut the use of fossil fuels in the transport sector by 50%,
• By 2040 to develop its electric (hydro-powered) rail network,
• To decrease the rate of air pollution through proper monitoring of sources of pollutants across waste, old and unmaintained vehicles and industries.

Arguably the key issue is the reliability and supply of renewable energy. If the Nepalese government could create a supply beyond that which is required by the country – Nepal would not only have the power it requires for the development of a coherent EV strategy but would also have a surplus to sell onto neighbouring countries.

This would be a positive step forward both environmentally and economically.

While 90% of the country’s total electric generation capacity is via HEP (hydro-electric power) the amount of energy harvested from that which is available is relatively small.

USAID has a 5-year plan worth $9.9 million which forms part of the NHDP (Nepal Hydro Development Project). Working with the Investment Board of Nepal and the Ministry of Energy, the project will look to facilitate and encourage private sector investment in hydropower in Nepal in an environmentally and socially sustainable manner.

The Nepalese government’s white paper on energy and water resources states an aim to increase HEP capacity to 15,000 MW. They estimate that reliable 24 hours a day peak energy usage in Nepal will reach 5,371 MW by 2030; any surplus could then be exported to other countries in Asia, generating significant funds for the further development of a green transport infrastructure.

While HEP remains the main source of energy generation in Nepal, other forms of renewable energy are also being developed. In April 2018 it began construction of its largest solar energy plant in the Nuwakot district. The project will have a capacity of 25 MW to serve the Kathmandu Valley upon completion.

Solar is becoming an increasingly viable option given the global fall in the costs of photovoltaic solar panels and the strong power purchase rate offered by the Nepal Electric Authority.

Improving air quality in the Kathmandu valley is one complex puzzle. Solutions are interlinked with the wider development of the country’s infrastructure – so easy wins are difficult to identify.

The need to increase the EV numbers and charging points is directly linked to the need for a reliable and renewable power supply. The financing of much of the infrastructure will require a surplus of energy to be harvested via HEP and solar and investors will need to be attracted to the new projects being developed.

The traditional source of energy of the local population also needs to change as, in the residential sector, around 77% of the energy consumed is via biomass (wood, agriculture residue and animal dung).

Since the Coronavirus pandemic and lockdown measures were imposed by the Nepalese government, a reduction in the number of car journeys has had a significant impact on the Air Quality Index rating in Kathmandu. 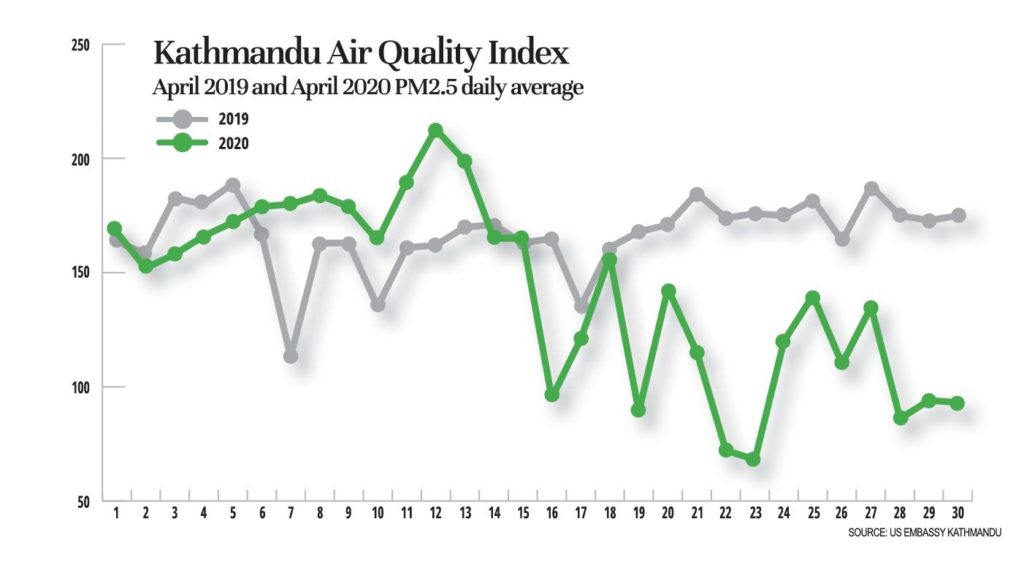 This illustrates that improvement in air quality is attainable and highlights the importance of building an EV infrastructure and managing a large population of ageing diesel vehicles.

There are certainly some positive clean air and sustainable energy policies being established by the Nepalese government and their partners and hopefully, these will have a positive impact on air quality.

If effective, those living in the spectacular Kathmandu Valley and beyond may no-longer be endangered by the chronic levels of air pollution which engulf their cities and trekkers, arriving at Tribhuvan International Airport, may walk out of the terminal and breathe clean air.