Considered planting of trees and other vegetation can ‘significantly improve’ air quality in towns and cities, according to a report from the Woodland Trust.

The woodland conservation charity has produced a ‘Urban air quality’ report in collaboration with Lancaster and Birmingham universities which examines how urban greening can be best tailored to achieve air quality goals while creating health and social benefits. 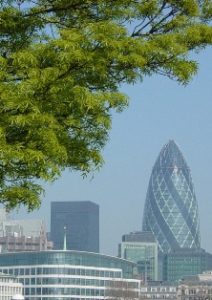 Vegetation near polluted areas will scrub air of pollutants more effectively, according to the Woodland Trust study

The study, published last month (April 2012) looks at existing research and finds that although some trees produce pollen which can affect some hay fever sufferers, the overall benefits of trees to air quality respiratory health are ‘overwhelmingly positive’.

It claims in particular that concentrations of some pollutants such as oxides of nitrogen and ground level ozone can cause serious health issues such as asthma but the air can be ‘scrubbed’ of pollutants by as much as 15-20% by a single tree.

Mike Townsend, Woodland Trust conservation advisor and report author, said: “Although air quality in the UK has improved in recent decades, there remain serious health issues relating to air pollution, particularly in towns and cities. For example, the UK has one of the world’s highest rates of childhood asthma, with about 15% of children affected. But, as this new report shows, Columbia University researchers found asthma rates among children were significantly lower in areas with more street trees.”

Mr Townsend said the report had been produced because local authority budgets for maintaining and planting trees were being squeezed and the number of trees in urban areas are in decline. The Woodland Trust is keen to see this trend reversed.

He told AirQualityNews: “We are trying to put together a picture saying that while there is a cost to manage trees but also substantial benefits – in terms of reducing obligations, making cities more adaptable to climate change and health benefits – both physical and mental health benefits.

“The other message is to build green space into the fabric of cities so people don’t have to walk along arterial roads. So it’s about benefits now and also planning for the future.”

While the report states that the overall impact of trees on air quality in cities is positive, it explained that some trees emit biogenic volatile compounds which can cause increase in ozone pollution, acting contrary to the pollution-scrubbing effect.

It cites an urban tree air quality score, which classifies tress by weighing up their ability to reduce and to exacerbate air pollution, with a higher score indicating a better species choice for air quality purposes. Among the best are silver birch, Alder, Pine and Laurel trees, while those which fare less well are oak trees, willow and aspen.

The size of trees and where they are sited is also said to have an effect, with trees near polluted areas scrubbing air more effectively.

Dr Tom Pugh from Lancaster University said: “Air quality is often listed as one of the potential benefits of increasing tree cover in urban areas, but few urban greening projects appear to take into account how air quality goals can best be achieved.”

The full report can be found here: http://www.woodlandtrust.org.uk/en/campaigning/our-campaigns/Documents/urbanairqualityreport.pdf