Air Products has revealed that 1,000 fuellings of London’s hydrogen buses have now been carried out at its fuelling station at Lea Interchange, Stratford.

With one fuel tank of hydrogen allowing a hydrogen bus to run for at least 18 hours, the company estimates that the 1,000 fuellings have enabled the buses to travel some 100,000 miles around the capital, only emitting water from their exhaust pipes. 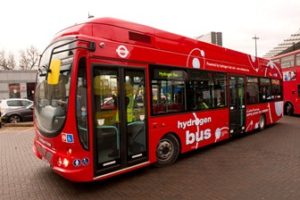 Hydrogen buses in London have now covered an estimated 100,000 miles

Diana Raine, European eusiness manager for hydrogen energy systems at Air Products explained: “The Transport for London hydrogen bus fleet is a ground-breaking first for Europe and has been a great success to date.  The fleet has shown Londoners that hydrogen transport offers a low carbon solution that not only offers zero emissions, but also delivers a real and practical alternative to the diesel powered bus.”  The hydrogen buses, operated by FirstGroup, are now an established fixture of the Transport for London bus network and they run on the scenic RV1 route, which takes them past major London landmarks including Tower Bridge, the London Eye and Covent Garden.

Mike Weston, operations director for London Buses said: “London faces many environmental challenges but we believe alternative fuels, such as hydrogen, will bring genuine long term benefits in tackling CO2 emissions. Hydrogen fuel cell buses are an exciting new technology which will help us further build on the excellent work we are doing to improve air quality for Londoners.”

The busese are soon to be joined by other hydrogen vehicles on London’s roads including a fleet of black cabs and of hydrogen powered scooters. These fleets are part of the EU-funded HyTEC project which aims to demonstrate hydrogen vehicles and refuelling facilities and an additional Air Products hydrogen fuelling station will be developed in London.

The HyTEC project focuses on creating two new European hydrogen passenger vehicle deployment centres in London and Copenhagen. The project goal is to implement stakeholder inclusive vehicle demonstration programmes which specifically address the challenge of get hydrogen vehicles from running as exemplars to the stage of being fully certified vehicles used by end-users and so moving along the pathway to providing competitive future products. A European consortium of 17 members from 5 member states has been assembled to deliver the project.