Residents of the town of Lydney, Gloucestershire, are being asked for their preferred options to help improve the air quality in the centre of the town.

In July 2010, Forest of Dean District Council – which has its offices eight miles away in Coleford – declared an Air Quality Management Area in Lydney, in accordance with national air quality management policies.

The council said that environmental health staff have identified that nitrogen dioxide was slightly above national guideline amounts (as specified in the national air quality objectives) in the High Street area of Lydney, as well as other parts of the town. The main source of pollution was found to be from diesel vehicles. 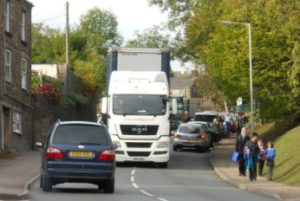 Traffic in Lydney which has necessitated the creation of an AQMA

Forest of Dean district council said it is now working with Gloucestershire county council to find ways to mitigate the problem of vehicle related air pollution and has started the consultation with local people. Lydney’s options include:

Councillor Martin Quaile, the council’s cabinet member for environment, said: “Although it may be surprising to have an AQMA in the Forest of Dean, nitrogen dioxide levels are just over the threshold but we still have to look into it. We aim to produce an action plan that will set out how the council will reduce nitrogen dioxide levels in Lydney.”

The local authority has explained the problem to residents. In a statement it said: “In the UK, approximately 50% of the atmospheric nitrogen dioxide is associated with emissions from motor vehicles and 25% is from power stations. Larger and older vehicles, particularly diesels, produce more nitrogen oxides than newer ‘cleaner’ vehicles.”

It’s really a great step taken by Forest of Dean district council. Forest of Dean district council said it is now working with Gloucestershire county council to find ways to mitigate the problem of vehicle related Air Pollution causesand has started the consultation with local people. Lydney’s options include: strategies such as traffic management,vehicle restrictions,improvements to public transport,and the promotion of cycling and walking initiatives. I think we should also support PALS because PALS is a group of environmentally conscious people who love pure air want to live in a cleaner.