More than 70 motorists have received free roadside vehicle emissions tests from Wandsworth council as part of efforts to tackle air pollution in the borough.

The exhaust checks, which took place in Asda Clapham Junction’s car park, helped to pinpoint poor performing engines which needed a service so that pollutants are kept to a minimum. 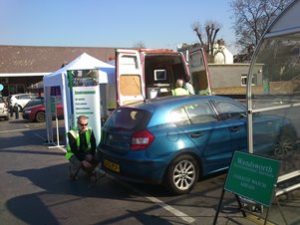 The checks were carried out on behalf of the council by air consultancy firm Air Quality & Emissions.

Drivers were also provided with practical tips on how to reduce emissions and make savings on running costs, such as removing unnecessary weight, switching off air conditioning and inflating tyres to the correct pressure.

Free pressure gauges were also handed out as part of the tests, which formed part of the Wandsworth council’s Smarter Driving campaign to raise awareness about vehicle pollution and encourage drivers to reduce their emissions.

Wandsworth borough councillor Jonathan Cook, environment spokesman, said: “We carry out these free testing sessions on a regular basis to help raise awareness of air pollution and the steps drivers can take to reduce their emissions. They also help local drivers to reduce running costs and spot minor engine problems which could otherwise develop into a serious fault.

“For most cars, a simple routine service will be enough to solve any problems and can cut emissions quite dramatically.”

According to the council, the borough has undertaken a broad programme of initiatives aimed at tackling vehicle emissions, which it says are the primary cause of air pollution in the capital.

A number of high-polluting buses have also been replaced with newer models – including ten hybrid buses – while electric charging points have also been installed in the borough.

Some of the highest levels of nitrogen dioxide in London have been monitored on Putney High Street in Wandsworth, where annual mean levels for the whole of 2013 were nearly four times the national annual legal limit in January (see airqualitynews.com story).

More information about air quality in Wandsworth is available on the borough council website.

Wonderful, now can Oxford City please do that?