Local authorities will have increasing responsibility for dealing with air quality in their areas, according to a public health specialist at the Greater London Authority (GLA) and Transport for London (TfL).

Speaking at University College London today (April 17), the GLA and TfL’s Lucy Saunders explained how recent changes put forward in the Health and Social Care Act 2012 could have a significant impact on the amount of power local authorities have over air quality. 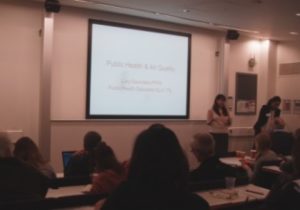 Mrs Saunders comments came at the Effective Local Action on Air Pollution in London conference today, organised by non-profit social enterprise Mapping for Change. The conference featured workshops, talks from air quality scientists as well as a number of speakers involved in campaigns to improve air quality in London.

Mrs Saunders said: “For the last 35 or so years public health responsibility has sat within the NHS, but this has now moved into the local authority. What this means in terms of air quality and the health agenda in the borough is that local authorities are now responsible for public health in their areas.”

She added: “You can now go to your local authority and say ‘you have responsibility for public health in your borough, what are you going to do about this?’”

The Health and Wellbeing Strategies are to be based on health priorities identified in each borough’s Joint Strategic Needs Assessment (JSNA), which every borough is currently required to produce. These JSNAs look at the health and well-being needs of the area’s population, but not all boroughs currently include information about air quality in their JSNA, which Mrs Saunders said she was aiming to change.
“We would like every borough’s JSNA to have a section on air quality,” she said.

Mrs Saunders added that air pollution is now listed as an indicator for health protection on the Public Health Outcomes Framework for England 2013-2016, which was updated in November 2012. The document sets out the public health aims of the government and how outcomes will be measured.

She said: “Air quality is now on the Public Health Outcomes Framework, which is a really big achievement.”

She also said that the GLA was “in the midst of producing bespoke guidance for public health professionals for every single borough which are publicly available for everyone on the GLA website.”

Guidance documents have so far been produced for Wandsworth, Greenwich, Westminster, Lewisham and Camden, which include information on air pollutant concentrations and health impacts. Guidance for the remaining boroughs is due to be published in future.

Commenting on the lack of public awareness on air quality, she said: “Nowhere on a death certificate will you find anything about air quality, but it does contribute to mortality. This is partly why there may not be the same level of public awareness about the impact of air quality. However, the cost to UK society of poor air quality is £10.6 billion, while the likes of road collisions cost the country £8.7 billion.

As a result, she argued that the best way of improving air quality was to do so indirectly through other campaigns such as improving cycling and pedestrian facilities and 20mph speed limits.

“One of the advantages of air quality as an issue is that it can be tied to a number of other issues,” she said.