A plan to map noise pollution across Welsh roads has also revealed areas of the country that experience poor air quality.

The action plan is part of the Environmental Noise Directive, an EU requirement for the Welsh Government to map noise levels across Welsh roads, railways and industry, and commit to reducing the amount recorded between now and 2018. 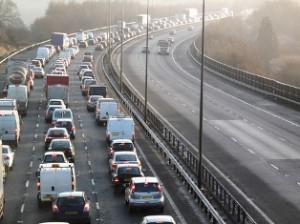 Mapping has been conducted for the three largest urban areas, and is based on calculations rather than measurements – a factor the Welsh Government warns could create inconsistencies outside specific properties.

It concluded that the highest levels of noise pollution on roads, of 75 decibels (dB) or over, could be found on the M4 between Swansea and Newport, and on the A55 between Chester and Bangor. Other noisy stretches of road were found near Wrexham, Llangollen, and Aberystwyth.

The calculations were based on a consultation that concluded in June 2012, and was submitted to the European Commission in December last year as required under the Directive.

Commenting on the relationship between noise and air pollution, the report reads: “Air pollution and noise are often emitted from the same sources, notably road traffic, and locations of poor air quality often coincide or overlap with locations subject to high noise levels.

“And even where they do not coincide, poor air quality at one location and high levels of noise at a neighbouring location may be related to one another through the way in which traffic is managed in the wider area.

“In aiming for the most beneficial outcome for members of the public, it is important to seek measures that are proportionate and cost-effective to both improve air quality and reduce noise levels, and avoid measures that worsen one while seeking to improve the other.”

The report goes on to suggest measures to prevent both noise and air pollution could work, particularly those concerned with reducing local traffic flows, but only if speeds are not permitted to increase as a consequence.

Other potential measures include restrictions on heavy vehicles, reducing speeds on motorways and dual carriageways, but not in urban areas where a reduction in speed would increase emissions.

In addition, containment of air pollution and noise through the use of tunnels, cuttings or barriers may worsen air quality for road users, including cyclists. The health of road users should not be ignored when weighing up options.

The Welsh Government has said it will continue to offer grants to local authorities for cost-effective projects to reduce people’s exposure to road traffic air pollution and noise, particularly where intervention benefits poorer communities.