Four hybrid buses in East London will next year trial technology which will enable them to wirelessly charge while waiting at bus stands, Transport for London (TfL) announced today (August 27).

TfL said the technology being trialled would enable the vehicles to operate in pure electric mode for a “significant period of the time they are in passenger service”, contributing to lower running costs and tailpipe emissions. 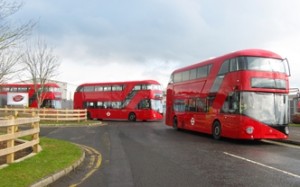 The buses have a diesel engine that will be used when the battery power on the bus is depleted, but it is anticipated this will only be a “small amount of the time”, meaning emissions on these vehicles are “greatly reduced”, TfL said.

In addition, the electric hybrid buses are expected to offer “much lower” noise and vibration levels compared to conventional diesel vehicles and lower fuel use.

The trial is designed to establish whether the technology can stand up to the rigours of operating in an “intense urban environment such as London” and will help TfL understand whether electric-only mode could be realistically achieved, and whether any modifications would need to be made.

TfL added that the trial would help it to “develop plans for greater use of electric buses in central London in the future, contributing to the Mayor’s vision of a central London Ultra Low Emission Zone”.

The inductive charging technology will be trialled on up to four specially-built extended range diesel electric hybrid buses, which will operate on route 69 between Canning Town and Walthamstow bus stations.

According to TfL, these Alexander Dennis Enviro400H E400 buses will be fitted with technology enabling on-board batteries to receive a charge at bus stands at either end of the route.

“This trial of extended range diesel electric hybrid buses, utilising the latest inductive charging technology, could be a step closer to getting even cleaner double deck buses on London’s streets.”

Mike Weston, TfL’s director of buses, said: “We are continuing our assessment of new technology in the capital that can deliver genuine environmental benefits. This trial of extended range diesel electric hybrid buses, utilising the latest inductive charging technology, could be a step closer to getting even cleaner double deck buses on London’s streets. We will be closely monitoring the results of the trials, which may help us adopt this new cleaner technology more widely in London.”

The partners in the project are: Alexander Dennis (vehicle supplier), IPT Technology (supplying the bus station charging technology), Siemens (for supplying the plug-in chargers based at West Ham bus garage) and TRL and TTR (provided monitoring and evaluation support).

TfL is currently also trialling six pure-electric single-deck buses, while a further two pure-electric buses are expected to enter service later this year – all part of the London Mayor’s plan for all single-deck buses in central London to produce zero emissions at the tailpipe under the proposed 2020 Ultra Low Emission Zone.

Under TfL’s current plans, more than 1,700 hybrid buses are set to be in service in London, representing 20% of the city’s bus fleet.