The London boroughs of Camden, Hackney, Lambeth and Southwark have jointly called for an expanded ultra low emission zone (ULEZ) to be introduced in central London sooner than 2020.

According to the councils, the current ULEZ proposals “do not go far enough in creating cleaner air and will not result in London avoiding heavy fines” from breaching EU air quality limits. 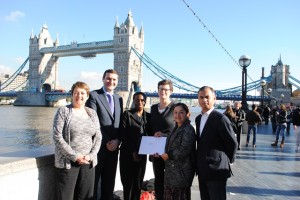 In addition, the four councils have called for emission standards outlines in the ULEZ proposals to be tightened and are seeking a car scrappage scheme or other incentives to move motorists away from non-compliant vehicles.

Furthermore, the four councils fear that taxis are exempt from the planned ULEZ, despite being “some of the most polluting vehicles in London”.

Plans for the ULEZ, unveiled by the Mayor of London last year, are currently open for public consultation on the Transport for London website (see airqualitynews.com story). As it stands, the ULEZ will be introduced on the boundaries of the existing Congestion Charge zone from September 2020.

Councillors from the four boroughs, supported by London Assembly Members Val Shwcross and Murad Qureshi, handed in their demands to the Mayor of London, Boris Johnson at City Hall earlier this month (November 5).

The four councils have called on TfL to:

Hackney councillor and cabinet member for neighbourhoods, Feryal Demirci, said: “TfL’s proposal is welcomed as a necessary first step to improve the capital’s air quality, responsible for the equivalent of around 4,300 deaths in the capital each year, and I would urge boroughs to support the proposal.

“However, whilst we agree that the ULEZ is cutting edge and innovative, the boroughs of Hackney, Camden, Lambeth and Southwark are concerned that the ULEZ proposals do not go far enough. In particular, the current proposals will not result in EU air quality targets being met across London.

Camden councillor Sally Gimson, cabinet member for sustainability and environment, said: “We welcome TfL’s proposal as a starting point for improving London’s air quality and I hope other boroughs join us in supporting the ULEZ.

She added that “we are asking for more from the Mayor of London and TfL to ensure that the ULEZ can help achieve this goal and improve air quality across the capital”.