The London Mayor’s proposed £28 billion investment in road schemes in his recent infrastructure plan is “car centric” and “totally at odds with what Londoners want”, according to a report published today (November 18) by Assembly Member Darren Johnson.

The Green Party Assembly Member’s report – ‘Boris Johnson’s Roads to Nowhere’ – outlines an alternative plan at a cost of around £25.5 billion, which he claims will benefit air quality by boosting cycling infrastructure and expanding provision of trams, Crossrail, Overground and Underground public transport services. 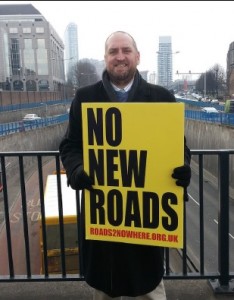 The Mayor’s near-£28 billion road investment up to 2050 includes projects such as a 22-mile road tunnel through the capital, widening junction 30 of the M25, and constructing the Silvertown Tunnel under the Thames and the Gallions Reach river bridge.

Meanwhile, Boris Johnson plans to spend £1-2 billion on cycling up to 2050.

However, Darren Johnson believes the Mayor’s “dangerous” infrastructure plan shows he “isn’t learning from the past decade of success, when investment in alternatives to the car, the introduction of the congestion charge and a reallocation of road space from cars to buses, bike and the public realm actually saw traffic and congestion fall”.

The report states that air pollution levels exceed legal limits on more than half the main road network in London, and, it adds: “These levels of pollution need to be cut while London’s population is growing at the rate of 100,000 people per year.”

Darren Johnson claims that focusing instead on public transport is both better for London’s air quality and economic growth, citing the rejuvenation of East London in recent years following expansion of Overground services in the area.

In addition, the report advocates a new Woolwich Ferry and traffic-free bridges across the Thames instead of current plans for road crossings at Silvertown and Gallions Reach, which are currently the subject of a public consultation and have faced opposition from air quality campaigners (see airqualitynews.com story). 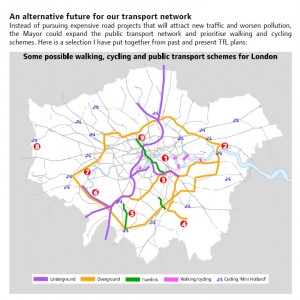 He added: “This city desperately needs clean, efficient ways of getting around such as new rail links, trams schemes, better bus services and proper cycle routes. This is what we need to be investing in, not more roads.”