The Mayor of London and Transport for London (TfL) are considering a number of measures to London’s roads to relieve congestion and improve the air quality of the local environment. 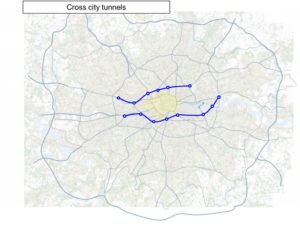 The Mayor has set out plans for two major east-west, cross-city tunnels (click to enlarge)

They are aimed at supporting the city’s rapid population growth and manage the extra one million daily trips expected on London’s network every five years.

The Mayor yesterday (4 February) set out plans for two major east-west, cross-city tunnels – an option for which TfL will carry out feasibility tests.

According to the Mayor’s office the tunnels “could reduce congestion by up to 20% in central London and attract investment to the areas above them, whilst radically improving the quality of the local environment”.

And, the Mayor has also called on government to consider devolving the revenue from Vehicle Excise Duty (VED) to London to ensure that money collected from London’s road users is directly invested into the capital’s roads.

Various charges have been put in place in the capital in order to lessen congestion and improve the air quality in busy zones. These include the Congestion Charge and Low Emission Zone (LEZ) and the Ultra-Low Emission Zone (ULEZ) which is set to be implemented in 2020.

One of the actions the Mayor has proposed is to simplify payments through a more integrated approach, which will be examined by TfL.

The Mayor’s offices said that combined with devolution of the VED, “a new system could simultaneously address London’s particular challenges, for example congestion and air pollution”.

In addition to the proposals, it was also confirmed yesterday that work on the Silvertown Tunnel in east London could begin as early as 2018 and be operational by 2022/23.

The tunnel, which would link the Greenwich Peninsula with the Royal Docks, is designed to relieve pressure at the Blackwall Tunnel as well as enable TfL to improve bus services in the area, but has been controversial with local campaigners.

The Mayor of London, Boris Johnson MP, said: “We must deliver long-term solutions that will not just make the most of the space we have for road users, but bring environmental and amenity improvements to local areas. 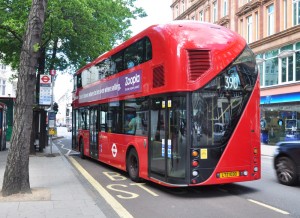 TfL has approved funding for an additional 196 Routemaster buses

“Our major programme of capital investment in the city’s roads is transforming neighbourhoods across the city, making our roads safer, and cleaning up our air. But we need to go further. By pushing forward strategic initiatives we are outlining today, we will lay the foundation for the next wave of improvements to everyone’s experience of the road network across the city.”

Also this week in London, bus route 68 has been added to the TfL bus network to be served by the Mayor’s controversial, low emission hybrid New Routemaster buses.

This comes after TfL reportedly approved funding for an additional 196 Routemaster buses on Wednesday (3 February). County Antrim firm Wrightbus is set for an order worth £60 million after the Mayor got the green light on the financing deal.

Boris has always been a comedian and this has to be another of his jokes. Where will the exhaust fumes leave these tunnels? Whose lives, homes and businesses will be affected for years? Because of their location, there appears to be little to no opportunity to move the millions of cubic metres of spoil out and millions of tonnes of material in other than by road, producing more congestion and worse air quality. Reducing current congestion by a few percent at a cost of tens of billions of pounds is useless. Why not spend what little money we do have… Read more »