An increase in the take-up of hybrid and pure electric vehicles by taxi and private-hire vehicle drivers by 2020 is expected to aid improvements in air quality across West Yorkshire, a meeting of the region’s Transport Committee heard last week.

At the meeting on Friday, Councillor Keith Wakefield, chair of the West Yorkshire Combined Authority’s Transport Committee claimed that ‘good progress’ is being made in implementing measures to improve air quality in the region. 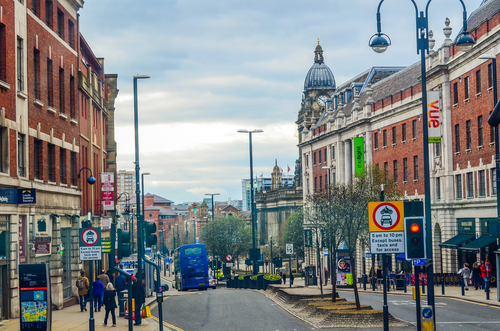 Leeds is among the areas targeting an improvement in air quality

This includes a successful bid for investment from the government’s Office for Low Emission Vehicles (OLEV) Ultra Low Emission Taxi Scheme, which will support the installation of 88 new electric vehicle charging points for use by taxis and private hire vehicles.

An allocation of £1.2m of Local Transport Plan Integrated Transport funding is being used to match the £1.98m secured through the OLEV bid.

Councillor Wakefield, said: “Around 500 diesel taxis and private hire vehicles are expected to be hybrid or pure electric versions by 2020, and installing these charging points will support that conversion, which could improve Nitrogen Dioxide emissions by as much as 18%.

“Alongside this, the charging points we have installed for motorists at Elland Road and Temple Green Park and Ride are being well used, as are the park and ride facilities themselves.

“Elland Road has taken around 1/3 million journeys off of Leeds city centre streets since it opened in 2014 and the 1,000-space Temple Green has been between ¼ and 1/3 in the first three weeks since opening.”

Councillor Wakefield added: “Encouraging more people to use bus services by improving their punctuality and reliability is one of the key aims of the Bus 18 initiative and developing easing known congestion hotspots is an important way of achieving this.”

Efforts to tackle air pollution in West Yorkshire have been ongoing for a number of years. In 2014, the Authority completed a project to retrofit 119 school buses with selective catalytic reduction technology to reduce NOx emissions from the vehicles.

Earlier this year, the Authority adopted a Low Emission Strategy, which included ambitions including the introduction of a clean air zone in Leeds, investment in new buses, and development of alternative fuel infrastructure in the region.