City council authorities have called for greater funding support from government, following the publication of the national plan for tackling roadside NO2 concentrations yesterday (26 July).

Authorities including Sheffield, Birmingham, Nottingham, Manchester and Newcastle, all of whom are named within the plan as having to take action on air quality have responded to the proposals set out by government. Sheffield is among the cities identified within the air quality plan

The UK Plan for Tackling Roadside Nitrogen Dioxide Concentrations produced by Defra and the Department for Transport identified 29 councils with the worst levels of air pollution at hotspots that need to take “robust action”.

The government says that councils will need to produce local air quality plans which reduce nitrogen dioxide levels in the fastest possible time, with a final deadline of December 2018.

Critics of the proposals claim that the plan places too much burden on local authorities, who are already struggling with the provision of other services. The government has sought to allay this by offering funding for clean air projects through its air quality plan.

Commenting following the launch of the plan yesterday Councillor Jack Scott, cabinet member for transport and sustainability at Sheffield city council said that the government is “unfairly passing the buck on to local councils, whilst cutting the money we need to address pollution problems”.

“I’m highly sceptical that the Government’s announcement today even meets their legal duties on air quality, and their response has been woefully inadequate,” he added.

This view was echoed by Dr Adrian Philips, director of public health at Birmingham City Council, similarly commented: “Responsibility should not rest solely with local authorities”

Nottingham city council also called the policies ‘headline-grabbing’ but questioned the effectiveness of the proposals outlined by government.

“If government really wants to do something about air quality, it needs to act, be brave and set a legal framework with funding rather than just dumping the responsibility on individual councils that over the last seven years have been forced to make millions of pounds of cuts to basic local services,” said Nottingham City Council leader Cllr Jon Collins. 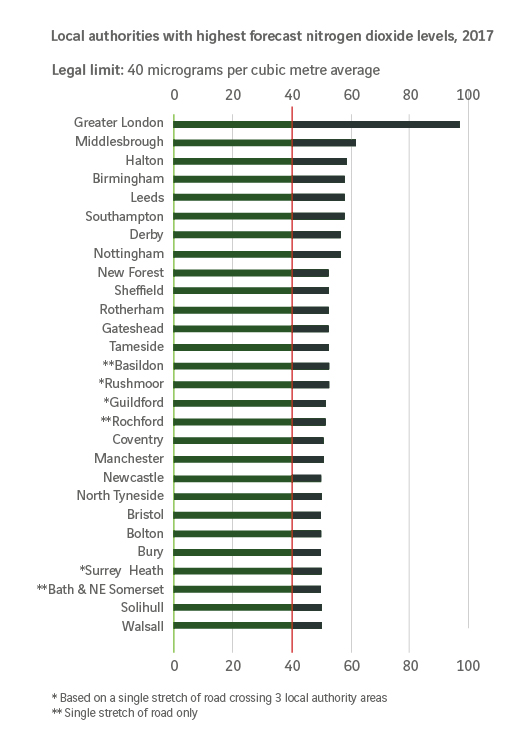 The Government has promised to aid authorities in implementing the plan by providing £255 million to implement their proposals. But many councils are calling for ‘greater support and funding’ to deal effectively with tackling air pollution.

Cllr Arlene Ainsley, cabinet member for transport and air quality at Newcastle city council, said: “We would urge the government to fully commit to investment in retrofit scrappage schemes and the continued development of electric vehicle infrastructure as well as providing greater funding for councils to support the complex modelling needed to identify what actions are needed.”

Many councils also stressed the importance of immediate action, including the Mayor of London, Sadiq Khan, who said that although a commitment to end the sale of diesel and petrol cars is welcome, “Londoners suffering right now simply can’t afford to wait until 2040” (see airqualitynews.com story).

In Leeds, Cllr Lucinda Yeadon, deputy leader of the city council and executive board member for environment and sustainability commented that the ban on petrol and diesel cars is 23 years away and “the country has an air pollution problem now so we feel the government need to lead a coordinated national approach now”.