The higher charges will affect drivers of older petrol and diesel vehicles, which do not comply with Euro 4 emission standard and so must now pay the Emissions Surcharge, known as the T-Charge, when entering the central London Congestion Charge zone.

In a statement today (24 October) Ford referenced the fact that the scheme was introduced with the aim to improve air quality, and in particular reduce nitrogen dioxide (NO2) and particulate emissions. The statement noted: “The surcharge is welcomed by Ford as a positive step in the collective approach needed to tackle air quality issues. 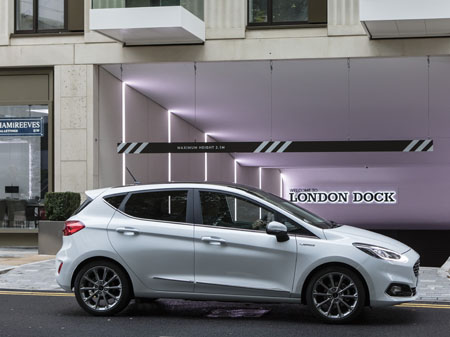 In August Ford announced a car and van scrappage scheme aimed at improving air quality by enabling owners of any pre-Euro 5 vehicle, registered by 31st December 2009, to receive a scrappage incentive of between £2,000 and £7,000 on a variety of Ford models, including the new high-tech Fiesta and Transit Custom, Britain’s most popular car and van respectively.

“Removing the most polluting vehicles from our roads has the potential to transform air quality in congested urban areas,” said Andy Barratt, chairman and MD of Ford of Britain. “But with over 19 million such vehicles on the road, we have always campaigned for collaboration across public and private sectors,” he added.

Ford says that its scrappage scheme “can help drivers, of any brand, to trade-in their old vehicles for new and affordable Ford cars and commercial vehicles, including the popular Fiesta and Transit Custom, with significantly lower emissions. All new Ford EcoBoost petrol and EcoBlue diesel models not only meet the Euro 6 standard, the toughest vehicle emissions yet, they also allow surcharge-free access to central London.”

Almost 7,000 vehicles have been scrapped under the Ford scheme, which started in late August and runs to the end of the year, and is effective for registrations from September 1st to December 31st 2017.

The company also stated that “Medium to longer-term actions to improve air quality include a plug-in hybrid version of the Ford Transit Custom, due to start trials later this year. The Transit PHEV is planned for commercial introduction in 2019 and is part of Ford’s total investment of $4.5 billion in electrified vehicles by 2020, which also includes a fully electric, long-range SUV.”