A study by scientists at the University of York has claimed that European estimates of nitrogen dioxide (NO2) emissions from vehicles may have been overestimated, meaning that air quality targets could be met ‘sooner than expected’.

The study saw researchers from the University and the National Centre for Atmospheric Science re-examine and apply a ‘data-filtering’ technique to 130 million hourly measurements of NOx, NO2 and ozone from 61 European cities between 1990 and 2015 to estimate trends of directly emitted NO2. 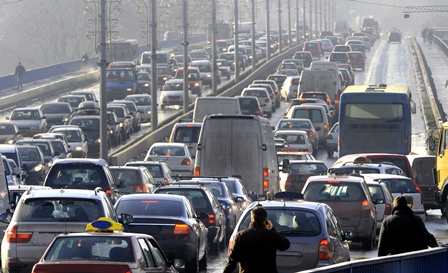 The study looked at 130 million hourly measurements of NOx, NO2 and ozone from 61 European cities between 1990 and 2015

According to the researchers, the study found that the ratio of NO2 to NOx emissions increased from 1995 to around 2010 but has since stabilised at a level that is substantially lower than is assumed in some emissions inventories.

The proportion of NOx now being emitted directly from road transport as NO2 is up to a factor of two smaller than the estimates used in policy projections, the study has suggested.

Commenting on the findings, Dr David Carslaw, from York’s Department of Chemistry, said: “Most projections of air quality are based on estimates of the total amount of NOx emitted from vehicle exhaust, but these do not correctly take into account the split between nitrogen oxide (NO) and nitrogen dioxide (NO2).

“The forecasts are likely pessimistic because they overstate the current fraction of emissions that is directly released as NO2. This can have a large impact on NO2 measured roadside, which is where the air quality standards are currently breached in many towns and cities.

“NO2 coming from the tailpipe grew during the 2000s and was projected to stay high up to 2030, but actually around 2010 this trend reversed and the amount of direct NO2 coming out of vehicles is now only around half the value used in policy predictions.”

The UK is one of several EU member states to have failed to meet air quality limit objectives for the emission of nitrogen dioxide alongside Austria, Belgium, the Czech Republic, Denmark, France, Germany, Hungary, Italy, Poland, Portugal and Spain.

Professor Alastair Lewis, from the National Centre for Atmospheric Science at York, and co-author, said the data had implications for the way that vehicle emissions are tested.

He said: “Only new cars are tested for emissions and that is just for the total amount of NOx. Even the new Europe drive cycle test brought in post-VW doesn’t measure how much of the NOx is NO2 and how much is NO.

“A new car probably gives the peak fraction of exhaust as NO2 you will ever get, but as the car and exhaust system ages direct NO2 potentially reduces over time.

“We need to test cars not just on the day they roll off the production line, but through the whole of their lifespan.”

The University of York Study, titled Lower vehicular primary emissions of NO2 in Europe than assumed in policy projections was published in the Nature Geoscience journal.