Schools located close to roads with high levels of nitrogen dioxide (NO2) could use green screens as an effective measure to reduce exposure to transport emissions, new research has suggested.

Carried out by King’s College London’s Environmental Research Group on behalf of the London borough of Enfield, the research involved monitoring NO2 concentrations either side of an ivy screen installed at Bowes Primary School in north London, close to the busy North Circular road. 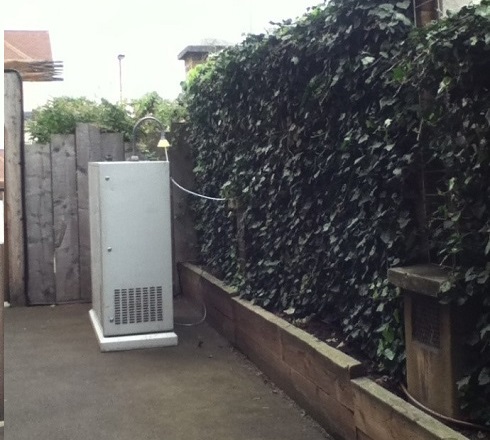 As part of the project, 12 metres of ivy screen was installed at Bowes Primary School in Enfield, North London

The research suggested that the measure was effective in reducing exposure to NO2 in affected areas by nearly a quarter (22%). However despite the improvement, areas monitored as part of the study were still forecast to exceed legal air pollution limits.

Previous studies on urban vegetation have suggested that the low-cost measure can help reduce the impact of pollution on people and buildings by acting as a pollution ‘sink’.

The latest research saw 12 metres of ivy screen installed in the nursery entrance area of the school, with the screen designed to fill gaps in an existing barrier and reaching up to 2.4 metres in height.

The primary data source for the study were two air pollution monitors installed at Bowes Primary School for the duration of this study, for four months in 2014 and again for eight months in 2016/17.

Two chemiluminescence NOx analysers were used to assess the difference in NO2 concentration between the roadside and playground as the screen matured.

According to the study, the screen was found to be an effective pollution barrier and a significant impact could be seen once the screen had matured. It led to a decrease in the mean daily pollution concentrations on the playground-side of the screen by 22%.

“The screen was found to be an effective pollution barrier once the ivy had started growing and a significant impact could be seen once the screen had matured.

“Comparing school hours independently a mean reduction in hourly NO2 concentrations of 18.3μg m-3 (22.5%) was found. Both these values were higher than the measurement uncertainty of 4.8% and was therefore significant.

“This demonstrates that the screen is very effective in reducing pollution, especially during day-time hours, when both emissions and exposure are highest.”

Ned Johnson from the London Borough of Enfield, who instigated the project, said: “The results of the study show that a very straight-forward project had a noticeable effect on nitrogen dioxide and it is easily applicable to other sites in the borough; although the planting did not remove the problem it provides us with another option to improve air quality at strategic locations in the borough.”

Last year the Mayor of London announced that around £250,000 in funding would be made available through the city’s Air Quality Fund for air quality audits at some 50 of the primary schools worst effected by air pollution (see airqualitynews.com story).

Related Links
Report – The Impact of a Green Screen on Concentrations of Nitrogen Dioxide at Bowes Primary School, Enfield