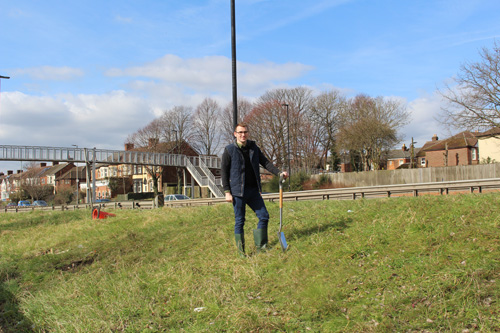 Councillor Christopher Hammond at the site for Southampton’s green wall

The city is to trial a ‘Green Wall’ on the Western Approach in the Payne’s Road area near Millbrook railway station, and is liaising with landowners to consider extending it if successful.

Construction starts this week (26 March) alongside some newly planted trees, which, it is hoped, will substantially improve the environment, making the area more attractive, especially for cyclists.

Cabinet member for sustainable living, Councillor Christopher Hammond, said: “The city council is fully committed to finding a range of ways to improve air quality. Green Walls are acknowledged as being a remedy for poor air quality, so it’s right that we trial it on one of our most polluted roads.

“Initially the Green Wall will look just like any other fencing, and over time greenery will be grown up and over, creating an efficient urban pollutant filter, yielding rapid and sustained improvements in street-level air quality.”

A total of 30 new electric vehicle charging points have gone live in five of the council’s multi-storey car parks (MSCP). These are available to any car park customer and will be free for three months after which there will be a review.

The chargers are capable of 22kw (fast) but are dynamically load balanced so if more chargers are occupied, the kw level reduces to ensure that too much supply is not used, the city explained.

The installation and free use of the chargers is funded from the council’s Electric Vehicle Action Plan. Eventually, a citywide network is planned with the number of chargers and locations will be established through a feasibility study. 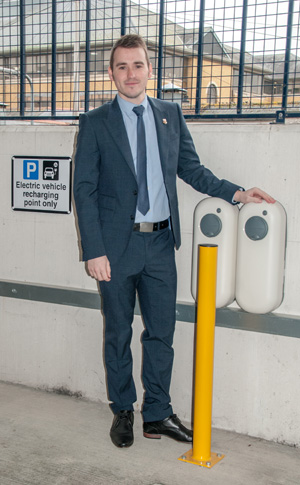 Southampton City Council’s Clean Air Strategy made a commitment to encourage the uptake of low emission technologies and vehicles and the authority sees this as the latest example of the efforts being made. The chargers are said to be capable of fully charging a small electric car (such as a Nissan Leaf or Volkswagen e-golf for example) in an hour.

And, Southampton said it is working with neighbouring local authorities to provide current and future electric vehicle users with the assurance that a common, charging infrastructure is adopted across the region.

Councillor Hammond said: “The city council is fully committed to reducing air pollution from exhaust emissions from vehicles in the city.

“Facilitating the uptake of electric vehicles is part of our Clean Air Strategy and these 30 chargers are the first of a city-wide network which we’ll deliver.

“As well as these 30 chargers, other incentives include a 90% reduction in annual city centre season ticket parking fees, and offering taxi drivers cashback on licensing fees if they replace older more polluting vehicles with low emission alternatives. So far this has seen 16 diesel taxis removed from our streets to be replaced by much less polluting hybrid cars.”

And, he concluded: “Later this summer, we’re also looking to introduce free passage for electric vehicles on the Itchen Bridge.”

To use the electric vehicle chargers in the multi-storey car parks, users register in advance on newmotion where they can order a charge card. Drivers need a standard Type 2 Socket.