Mayor of London, Sadiq Khan, has promised to increase the number of electric double-decker buses running on the capital’s roads by ‘more than tenfold’ from next summer.

The announcement comes as city leaders from across England and Wales meet today in the capital, to discuss measures to tackle air pollution at a national and local level (see airqualitynews.com story). 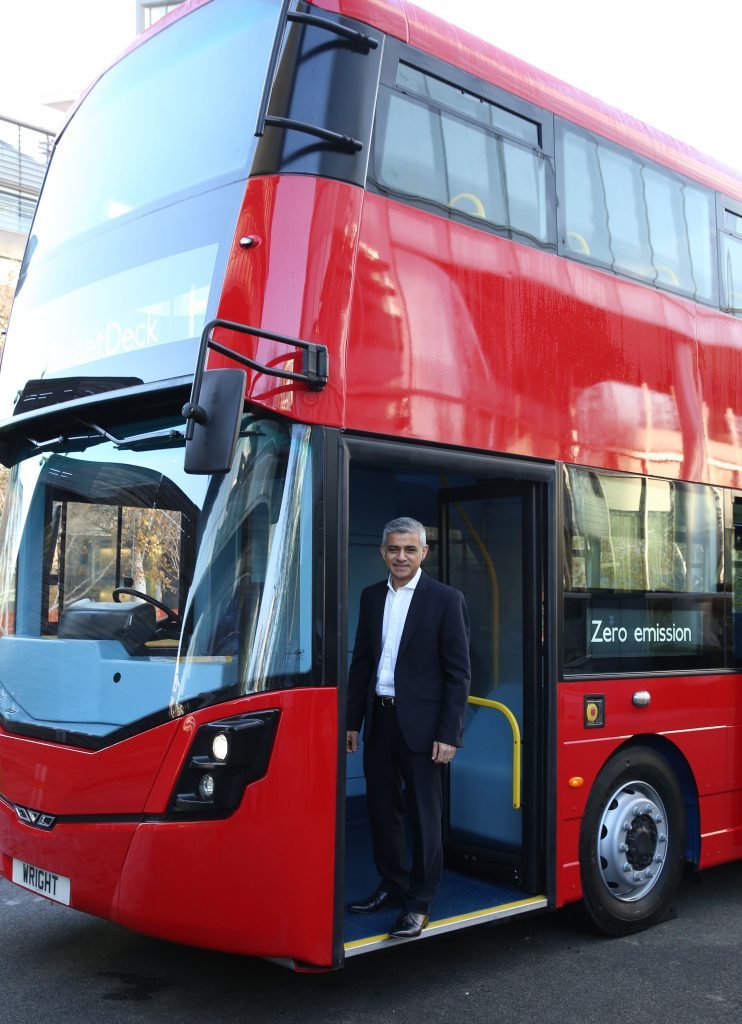 Mayor of London, Sadiq Khan, has promised an increase in the number of fully-electric double deck buses operating on the capital’s roads

Transport for London (TfL) has confirmed that the 68 new buses will be added to London’s bus fleet from next summer on two routes (43 from Friern Barnet to London Bridge Station and 134 from North Finchley to Tottenham Court Road) run by Metroline.

TfL trialled five fully-electric double-deck buses on route 98 from Willesden to Holborn in 2016, which continue to operate in the capital. The buses emit zero-NOx from the tailpipe, meaning that there is a lower impact on urban air quality through their operation.

The new buses are being manufactured by both a Chinese/British partnership between BYD and Alexander Dennis Limited and British company Optare and have a range of up to 190 miles on one charge.

Claire Mann, TfL’s director of bus operations, said: “We’re committed to reducing emissions from London’s buses and making routes 43 and 134 exclusively electric is an important step to a zero-emission fleet. Buses are crucial to reduce Londoners’ reliance on cars, and with this landmark order it means the largest pure electric double-deck bus fleet in Europe will help reduce emissions across the capital. Electric buses are good for air quality and improve the customer experience, with less noise and fewer vibrations, all creating a more comfortable journey.”

The Mayor of London, Sadiq Khan, said: “Today’s summit is a historic moment for the country. Leaders from across England and Wales have never met in such numbers to tackle our nation’s toxic air quality. It shows how serious our problem is and how committed we are to tackling it.

“In London we’re helping to lead the way with my Ultra Low Emission Zone, and I’m delighted to be able to announce a Europe-leading new fleet of electric double-decker buses too. We’re doing all we can to improve our air quality and we need the government to match our ambition to solve this national health crisis.”

Ahead of the summit, which is before National Clean Air Day on Thursday, Bristol Mayor Marvin Rees has called for a UK-wide campaign led by government to help cities like Bristol fight harmful traffic emissions that contribute to the death of 300 Bristol citizens per year.

He said: “Bristol has been hugely successful in making our transport systems more sustainable – with significant increases in walking, cycling and using public transport, in addition to converting buses to clean fuels. But we need to do more as air pollution is seriously affecting the long-term health of Bristol citizens, from long-term lung damage in children to contributing to heart and lung disease in older people. It is unacceptable that lives are at risk because of air pollution, particularly when it is having a detrimental impact on low-income households with fewer transport options.

“That is why we need to work with the government to ensure they recognise the challenges we are facing. Cities can offer valuable insight at a local level, which needs to develop alongside national plans to ensure they are fair and work for everyone. We need the government to show leadership with a way to support low-income, vulnerable families and small businesses that rely on diesel vehicles to be able to shift to cleaner cars.”