An independent report  has been published which recommends that one of Oxford’s busiest roads be made one-way for all motor vehicles to make space for segregated two-way cycle tracks.

The report, called the Oxford City Centre Movement and Public Realm Strategy, recommends that High St and St Aldate’s be made one way to implement both cycle tracks and other projects to improve air quality.

The two roads run through the city centre. 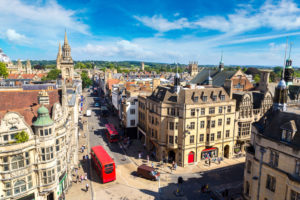 Congestion and air quality are projected to get worse in Oxford with a predicted 25% growth in car journeys to workplaces in Oxford by 2031, the council said and the measures are expected to help reduce air pollution and complement air quality work.

The transport consultants, who carried out research for the study, focused mainly on public transport, altering bus routes, improving and extending cycle-paths and increasing pavement space.

According to the council, the recommendations are advisory only and will not form the basis of a specific public consultation.

Rather, they intended to inform the city’s Local Plan and a future update to the county council’s Oxford Transport Strategy and provide options for a much-needed bold approach to respond to the city’s challenges.

The measures to improve the public realm in key city locations while keeping them accessible would involve:

Commenting on the report, councillor Alex Hollingsworth, Oxford City Council board member for planning and transport said the report is a “refreshing” new way of looking at the challenges of managing transport.

Mr Hollingsworth said: “As the consultants have made clear from the start, their suggestions are for what could be done if traffic is reduced throughout the city. The City and County Councils are working together to do just that.”

Sue Halliwell, director for planning & place at Oxfordshire County Council added: “We welcome these bold new ideas. They are certain to generate further debate about transport in Oxford city centre and if there is support for the principles, these ideas could form part of our transport strategy in future.”

The full report can be seen here.