Derby city council has begun its consultation on its preferred proposal to reduce nitrogen dioxide (NO2) air pollution in line with legal limits.

The city council was one of five authorities ordered by government in its 2015 air quality plan to carry out work to achieve compliance with the 40ug/m3 EU air quality limit – which has been exceeded since 2010. 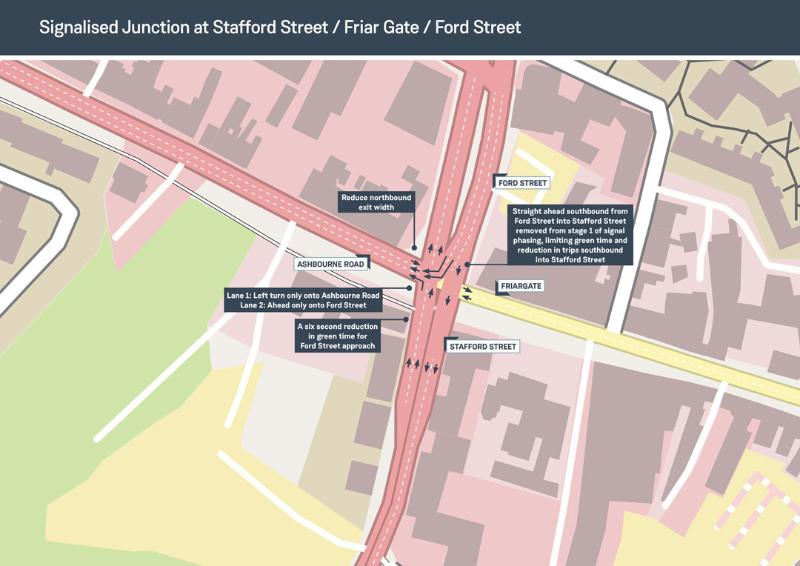 This includes examining a range of options including whether a Clean Air Zone could bring down concentrations of nitrogen dioxide pollution in line with legal limits ahead of current projections.

Following assessment of its options the local authority has concluded that a plan based around traffic management measures, focused on reducing roadside NO2 on Stafford Street on the outer ring of the city centre, would be sufficient to meet its legal requirements.

The council also carried out a consultation into three options in the summer – one of which was a charging Clean Air Zone – with residents and businesses reportedly favouring a traffic management scheme instead.

Residents and local businesses are now being encouraged to take part in a further consultation, which gives detailed information on the traffic management measures for Stafford Street, which will include restricting traffic flow.

The council will also be seeking support from government for an incentive scheme to speed up vehicle renewal in the city, initiatives to implement electric vehicle charging points, along with further investment in cycle routes, and cycling provision.

Councillor Matthew Holmes, Cabinet Member for Cabinet Member for Leadership, Regeneration and Public Protection and Deputy Leader of the Council said: “From day one of taking control of the council, we have made it a very high priority to reduce pollution levels and improve air quality in the city.

“Since then, officers have worked incredibly hard to prepare options for consultation and to work towards a legally compliant package of measures.

“The council indicated in the consultation that option one was the preferred option, and it is encouraging that we have received substantial support on from the public.”

Councillor Holmes added that the results of the initial consultation indicated low support in the city for a Clean Air Zone, and that the council is keen not to pursue the option.

“Moving forward, we all have a part to play in achieving cleaner air for Derby and I encourage residents, local businesses and stakeholders to take part in the next round of consultation.

“The council will consider all responses, which will help shape the air quality plan that will be submitted to government at the end of the year, to ensure we get the best local solution and which also meets our legal requirements.

“I would also like to make it clear the work to address our legal responsibilities in regard to nitrous [sic] oxide will not be the end of the council’s efforts to deliver cleaner air across the City. That is a long-term commitment under the current administration and we will be seeking ongoing support from government to help to deliver it.”