The car-sharing service DriveNow has expanded its electric car fleet in London in a move which it says will help tackle air pollution in the capital.

DriveNow, which is wholly owned by BMW Group, has announced that it will be adding 130 new all-electric BMW i3s to its existing fleet of electric cars in London, expanding the city’s fleet of BMW i3s to 180.

The 50 older BMW i3s currently in the fleet will be phased out throughout this April, leaving only the newest models remaining.

DriveNow is currently the only car sharing operator in the UK offering the new BMW i3s, which will allow the service’s members to drive at an increased range of 160 miles emissions-free.

James Taylor, managing director of DriveNow UK, commented: ‘The introduction of the new BMW i3s is such a positive step forward for DriveNow and the e-mobility industry.

‘It makes sense for us to expand our electric fleet and continue to offer customers a sustainable alternative to privately-owned transport.

‘We have an important role to play in London, helping to normalise EV use and contribute further to improvements in air quality.’ 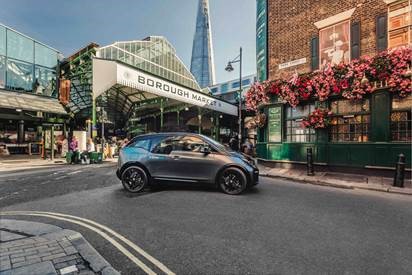 The addition of the new BMW i3s will see DriveNow increase its overall fleet in London to a total of 720 BMWs and Minis.

London is DriveNow’s largest city of operation at present with the service currently available in 13 cities across Europe, including five cities in Germany.

Those five boroughs joined Hackney, Haringey, Islington and Waltham Forest in partnering with the service, which has been running in London since December 2014.

DriveNow allows customers to locate and reserve cars across the city using its app. The car can then be opened using a phone or card and driven anywhere across London’s business area.

Drivers are charged by the minute, with the price including fuel, insurance, parking and rental.

The company claims that its aim is to reduce the number of privately-owned vehicles on the road and help reduce the effects of air pollution in the cities where it operates.

DriveNow currently plans to add even more electric cars to its roster as it aims for 80% of its overall fleet to be all-electric by the year 2025.

Electic vehicle sharing is a growing market across the UK and Europe with demonstrations popping up in other regions of the UK.

Last week the InclusivEV Demonstrator project launched its first demonstration site in Solihull in the West Midlands, allowing residents to hire cars from a fleet of 18 Renault ZOEs for as little as £3.50 an hour.