Lorries that are powered by liquified natural gas (LNG) emit up to five times more nitrogen oxide (NOx) than diesel, according to on-road tests commissioned by the Dutch government.

The test involved driving three LNG lorries and six diesel lorries in a combination of urban areas, regional routes and motorways to draw up the comparisons, which were not favourable for the natural gas, which is often considered a more environmentally friendly fossil fuel.

The tests also showed that all three gas lorries produced levels of particulate matter (PM) comparable to diesel. Transport & Environment (T&E), who has published the test results, says the findings are in ‘sharp contrast’ to a claim by the manufacturer Iveco, who says their LNG lorries produce 95% fewer PM emissions than diesel.

Volvo’s LNG truck with high-pressure direct injection (HPDI) reduces emissions by 14%. However, T&E calculations show that when the extraction and transportation of the gas, including methane leakage, is factored in, spark ignition LNG trucks are worse for the climate than diesels, while HPDI gas trucks are only delivering a small benefit. 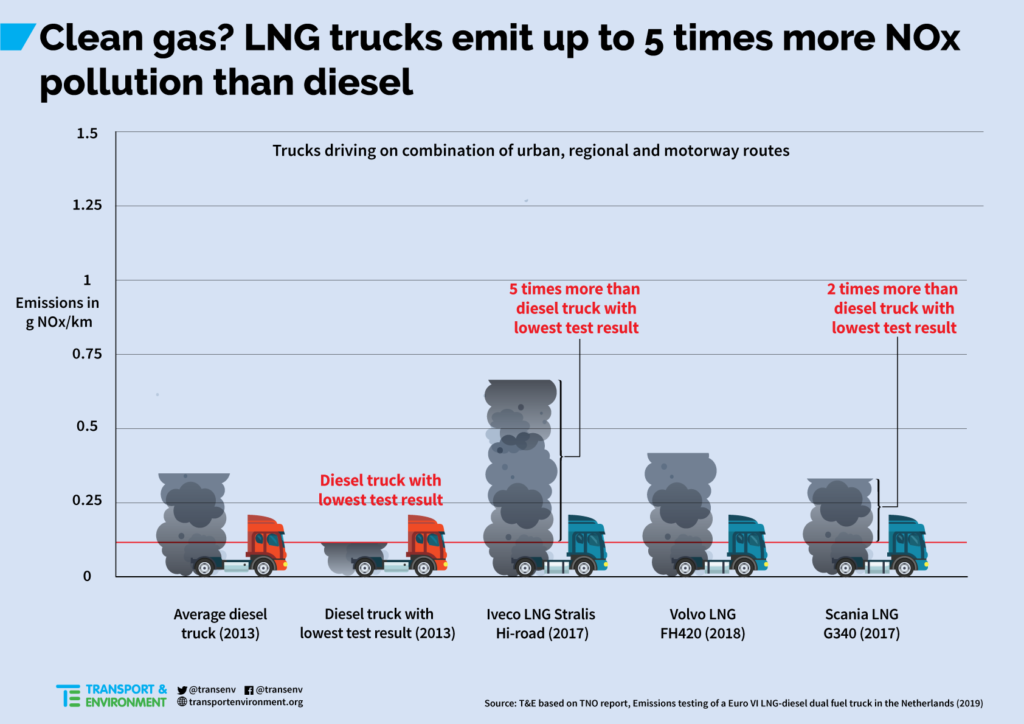 T&E says EU governments should ‘stop encouraging the uptake of polluting LNG trucks by ending the extremely low tax rates that fossil gas for transport enjoys in most countries.’

Stef Cornelis, clean trucks manager at T&E, said: ‘Gas trucks are not clean and can actually be worse than diesel. It’s time for policymakers to have a fresh look at the evidence and put an end to gas truck subsidies, LNG infrastructure investments and tax breaks for what is just another polluting fossil fuel.’

‘The gas industry is desperate to convince policymakers that gas trucks have a climate benefit because they want to grow their market. The simple fact is that it’s a fossil fuel just like oil and coal, so it needs to be phased out.’

The European Natural & biogas Association has examined T&E’s report, saying that whilst the reports by the Dutch government are scientifically well proven, the conclusions drawn by T&E are ‘misaligned with the measurements reported.’

A spokesperson for Scania told AirQualityNews: ‘From a statistical point of view, these few vehicles and variance in specifications do not provide a solid base for any conclusions.’