Daan Roosegaarde has invented the ingenious Smog-Free Bicycle, which has a device on the handlebar that sucks up air pollutants and releases clean air. We spoke to him about why China is the perfect country to showcase his invention and reveal the ‘beauty of clean air.’ 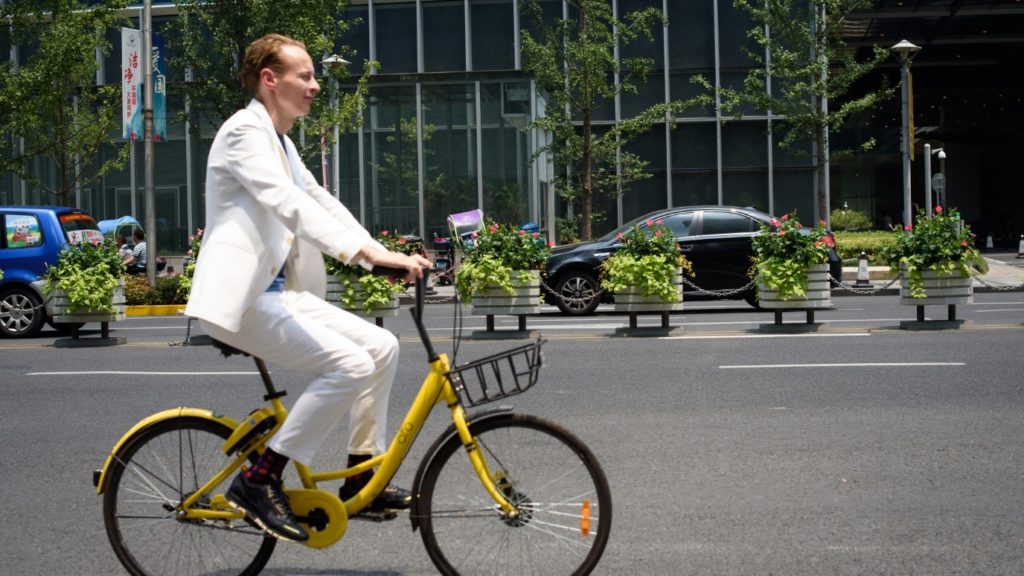 Perhaps more than any other global city, Beijing is synonymous with smog. But rather than getting ‘mad or sad’ about it, frequent visitor Roosegaarde decided to come up with ideas on how to improve air quality across the country.

After getting the all-important endorsement from China’s communist government, his design company Studio Roosegaarde now has a foothold in a country that is attempting to balance rapid urban development with concerns over toxic air.

It’s a nettle that has taken China a while to grasp, but the World Health Organisation (WHO) is now praising the government for showing the political will needed to tackle air pollution, with levels of particle pollution dropping by 30% in its major cities over three years.

Unlike any other country, China has a vast platform for urban development. They want to move 900 million people into cities by 2025, and sleepy villages have been transformed into urban areas, seemingly overnight.

To get a foreign product to the massive and lucrative Chinese market, approval from the one-party government is key and a recommendation to city mayors could open the door to the whole country.

Roosegaarde says decision-makers there are thinking creatively about what type of urban environment they want their children to grow up in. ‘It’s not a perfect country, but they are very aware they have to invest in new ideas to become future proof,’ he says. ‘I love their curiosity towards the future.’

Roosegaarde has experience of working in various different European markets and he says China’s attitude to innovation is refreshing. ‘In China, sustainability is not just some greenwashing, “nice to have” thing, they are realising how it can change their economy,’ he says. ‘When I present new ideas about sustainable projects in Europe, they usually ask me, “Are you sure it works?” ‘In China, they want to be sure if it’s the first time it’s been done and they want to be the first.’

Roosegaarde also occasionally lectures in design at a university in Shanghai and he’s been impressed with how China has updated its education system over the past couple of decades.

He says the West has a ‘weird moral attitude’ towards China that often assumes that they don’t know as much or are not as creative.

However, he believes China is now catching up at a pace that would probably surprise a lot of people. ‘Education there 10 or 15 years ago was very top down,’ he says. ‘The teacher would speak and the students would listen.

‘That is completely changed. Students now are great at making connections between different disciplines, science
biology and design. It’s like a melting pot.’

He also says that academics in China understand how to make money through their ideas, whereas back in Europe he sees brilliant designers presenting their work at conferences before it ends up hidden in drawers. ‘That kind of connectivity is maybe what’s needed to solve problems such as air pollution,’ he says. ‘There’s not a lack of money to solve it, but maybe a lack of imagination.’

‘We should cherish our creativity but be more open in terms of collaboration.’

Roosegaarde says the main thing that the UK can learn from China, is around the concept of sustainability. ‘In the UK, sustainability is often about “less”, having less cars or less things – but sustainability should be about doing more and designing things creatively to help people and not punish them.

‘Countries like the UK should be proud of their tradition, but if they don’t invest in new ideas, then it will become an open-air museum. That scares me.’