How clean air can give workers a sense of security

Air Quality News recently spoke with the team from CleanAir Spaces (CAS) about why indoor air quality matters and how its systems are helping combat Covid-19.

The international firm has worked over the last five years to build out a major presence in Asia with over 28 million square metres fitted out improving air quality working with CBRE, JLL, Google, Microsoft. 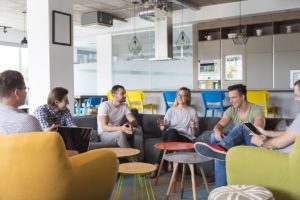 AQN: When people think of air quality, they often think of the great outdoors. Why does indoor air quality often get overlooked?

Pablo Fernandez: ‘Until recently very few companies or organisations measured their indoor air quality. Erroneously, everyone assumes that indoor air quality is better than outdoor air quality, because they think the poor outdoor air cannot get inside the building. But in many offices, you have air conditioning systems, which are pulling in air from the outside. And if you don’t have good ventilation, then pollution often stays indoors. About five years ago, we had the something called the “airpocalypseâ€? with PM 2.5 levels of more than 500. Many of our customers in Asia said they would not go to work, because there was nothing inside to protect them from that kind of pollution. Now most high-end companies there now have prominent air quality displays inside their offices to show workers and visitors they are entering a healthy place.’

Steve Skerrett: ‘We’ve seen in the last six months a much bigger focus on issues like ventilation and filtration. People have become a lot more conscious about what is in the air they breathe. Air pollution is about all the terrible things that are outside and are coming inside the building. I think Pablo would say that in Asia it’s become a focus for several years, but it’s becoming a growing issue here in the UK as well.’

AQN: Obviously, companies in the UK will be looking to 2022 and the possibility of return to working life. Why is it important for them to take the issue seriously?

Steve Skerrett: ‘It’s about creating a sense of confidence that people will be working in as safe an environment as possible. The beauty of the CAS system is that it will give workers physical and psychological comfort, which is clearly important. It can continuously improve the environment, as opposed to a standard air purification process, which only cleans the air two or three times an hour.

Pablo Fernandez: ‘We’ve had reports from our customers in Asia saying absenteeism has dropped by 20 to 30% in offices fitted with CAS systems. One of our customers have arranged their office, so part of it is like a play area. Many of its employees go to the office on a Saturday with their kids, because the air outdoors is so bad. This could become common here, because everyone in Asia realised that once you put these systems, it helps create a sense of loyalty to the company, which can be huge.’ 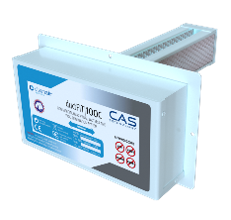 Pablo Fernandez: ‘Our reactive system uses ions spread out over the room to touch and clean all the surfaces. These ions cover surfaces and affect the lipid membranes of virus cells. This results in the cells becoming inactive and losing their infectious capacity leading to a lowering the viral load in an indoor space. Unlike air conditioning that only treats the air entering its filters, the CAS DuctFIT Solution actively reaches all corners of a room. By lowering the viral load of virus cells in the air, this reduces the extent to which the virus can infect people using the space. So, our active systems start addressing the issue immediately and the system ionises the viral load. There’s no need for the air to go through a high-efficiency particulate air (HEPA) filter. The system also uses artificial intelligence to maintain perfect air quality and ensure the office building uses as little energy as possible. If you think of an aeroplane, it has more than 6,000 sensors. Half of these sensors are geared toward comfort and measuring the environment. If you put sensors around an office, you could shut down many of the air conditioning systems you have and save at least 30 to 40% on your energy usage.’

Tell me about the ongoing trials in Spanish hospitals, which are you involved in?

Pablo Fernandez: ‘Several months ago, we went to the Andalucian government and offered them our new DuctFIT Solution, which treats indoor air with water vapour and hydrogen peroxide forming ions that circulate the air within this space. We have started a clinical trial at the University General Hospital of Granada (University of Granada) to examine the extent to which the DuctFIT technology can reduces admissions to ICU and the need for invasive ventilation. Initially the trial was in one ICU room, but the results have so far have been fantastic and they decided to install the technology in the whole hospital. We are also now DuctFIT in another Red Cross hospital in Spain.’