Founders of Choked Up, a youth organisation set up by Black and brown teenagers who live along highly polluted roads in South London, have installed road signs across the capital in order to highlight the dangers of air pollution and its disproportionate impact on people of colour and deprived communities.

The signs, which read ‘Pollution Zone’ and warn that ‘Breathing Kills,’ have been installed in areas where levels of air pollution are exceedingly high, including Whitechapel, Catford and Brixton. 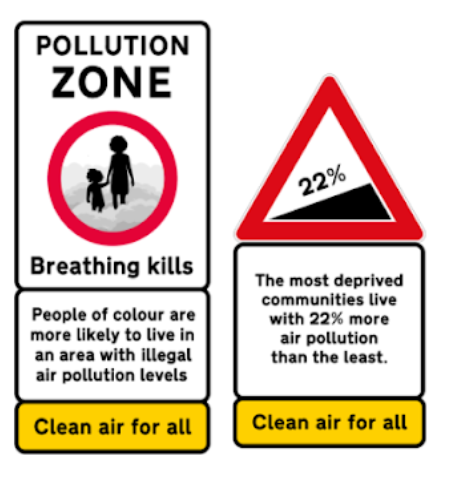 Following this reresearch, a group of 100 London health professionals who work in the NHS have backed the call for action with a letter warning that air pollution is having a ‘devastating impact’ on health, particularly with various communities of colour and those from deprived backgrounds.

Ahead of the London mayoral elections in May, the joint letter asks candidates to commit to tackle air pollution inequalities and develop an ‘urgent action plan to…reduce our dependence on cars.’

Anjali Raman-Middleton, a 17 year- old co-founder of Choked Up: ‘The landmark ruling of the Ella Adoo-Kissi-Debrah inquest proved that the road I live less than five minutes from can kill. I am terrified that my daily commute to school along the South Circular has already had a negative impact on my lungs. I urge London mayoral candidates to commit to transform these roads to give me and my generation a greener future.”

Dr LJ Smith, a Respiratory Consultant at King’s College Hospital, representing Medact added: ‘The levels of air pollution across the capital are nothing short of a public health emergency. There are far too many people in our hospital wards and clinics who might otherwise be healthy if it wasn’t for the toxic air they breathe.

‘Air pollution affects every single one of us from birth to old age, but we know the least well off and marginalised communities, including those from Black and Asian backgrounds are being hardest hit. If we are serious about tackling health inequalities in our capital city, we need to urgently address the air pollution crisis. We are emerging now from one of the worst health crises this country has ever faced and are now sleep-walking right into another one. Action we take today will have immediate benefits. This can’t wait.’