Pupils from an Edinburgh school have urged motorists to leave the car at home for Clean Air Day Scotland (17 June).

Sciennes Primary School is one of 12 in the city to run a ‘school street,’ where the route outside a school is shut to vehicles at certain times during the school day to encourage children to walk and cycle, improving their health and reducing exposure to air pollution from vehicles.

Pupils designed bunting which they hung on the school railings in the once congested road and signed pledges to walk and cycle and to encourage their families to ditch the car.

The charity Environmental Protection Scotland (EPS) is coordinating Clean Air Day in Scotland on behalf of the Scottish Government.

The pupils were presented with the first ever Clean Air Day colouring book – a collaboration between EPS and art students across Scotland – which has drawings for children to bring to life on an air pollution and environmental theme. 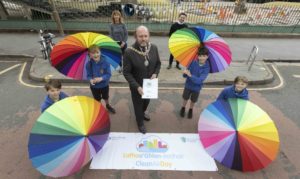 The campaign has established itself as Scotland’s main air quality campaign since the first National Clean Air Day took place in June 2017.

On 17 June, people are being encouraged to walk or cycle, rather than use the car, particularly on the school run or for other shorter trips to schools and supermarkets.

The campaign also encourages people to consider walking or cycling less polluted side streets after research found this could reduce a child exposure to air pollution by 30%. Clean Air Day campaigners also want people to consider the purchase of an Ultra-Low Emission Vehicle (ULEV) ahead of the ban on the sale of new petrol, diesel cars and vans from 2030.

The Lord Provost of Edinburgh, Frank Ross, a trustee of Environmental Protection Scotland, said: ‘In Edinburgh we wholeheartedly support the Clean Air Day campaign’s aims, and through initiatives like School Streets we’re helping our youngest generations to make journeys by healthy, active travel. It’s wonderful to see some of our Junior Road Safety Officers join in to celebrate Clean Air Day’s fifth anniversary, and to spread the clean air message, which will be so important for years to come. This Clean Air Day we’re reaffirming our commitment to tackle air pollution, for the future of our city.’