Traffic levels in towns and cities have now surpassed pre-pandemic levels for the first time since March 2020, according to research conducted by the Transport Technology Forum (TTF).

The TTF has been studying data on local roads in more than a hundred English local authority areas for more than a year. In the latest report, they found that overall traffic levels are now varying by 3% points on either side of the baseline.

However, they found that there is a clear change to the make-up of the traffic, with goods vehicles accounting for a greater proportion of all vehicles.

The nalysts also looked at car park data and found that there is a predictable increase in the number of occupied spaces since the ease of lockdown restrictions, with daily occupancy rising steadily since April 12.

The research also revealed that there is higher occupancy in the afternoon than in the morning, reaching pre-pandemic levels. 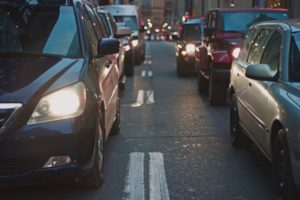 TTF has said that the data suggest that the decrease in the number of car journeys due to people working from home may have been offset by a rise in people choosing to drive rather than take public transport and by more delivery vehicles being needed to fulfil the demand for online shopping.

Andy Graham of White Willow Consulting who works with the TTF, said: ‘We may be getting back the amount of traffic we were used to before the Pandemic, but the journey types and times are very different.

‘This suggests that authorities may need to change the way manage their network to most efficiently cope with “new shape of traffic”.