Charity that inspires Muslim women to cycle looks to expand

Cycle Sisters, a London-based charity inspiring Muslim women to take up cycling is looking to expand, by journalist Matthew Corrigan.

Cycling has boomed throughout the Covid-19 period. Bike sales are up by more than 60%* on pre-pandemic levels and the number of people choosing to ride rather than drive or take public transport is growing.

Women, especially those from minority backgrounds, have however been somewhat under-represented, with the majority of bicycle journeys undertaken by men.

For the last five years, the Cycle Sisters organisation has been working hard to address this. The charity inspires and enables women, particularly Muslim women, to consider cycling as an option for themselves and their families.

Cycle Sisters was started by Sarah Javaid, who had the idea after getting back into cycling herself in her thirties. She wanted to join a group but was unable to find one with which she could identify.

Talking to some friends, Sarah realised she was not alone. As a result, the first Cycle Sisters group was set up in Waltham Forest in 2016.

Since then, they have become increasingly popular. 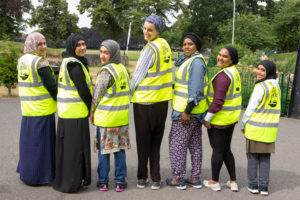 Each holds regular women-only social rides with training to develop skills and confidence available. Practical advice is offered on anything from basic roadside maintenance to the type of clothing that can be worn; riders are encouraged to wear whatever they feel comfortable in.

Thanks to partnerships with several local councils, bikes are available to borrow for those who don’t have their own.

Secretary of the charity, Khadijah Zaidi, told us: ‘Cycle Sisters has gone from strength to strength in the five years since it was established.

‘Through our groups, we have seen so many Muslim women inspired to take up cycling and we have been able to make cycling more accessible. We have done this through our group rides; our peer support to riders; and by the lessons we offer, often by Muslim women whom we have supported to train to become Cycling Instructors and through this act as role models within the community.

‘We are really excited to be looking into expanding into other areas in the coming years so that we can help even more Muslim women access the health, wellbeing and social benefits of cycling, which we have seen can be truly life-changing.’

By challenging perceptions and overcoming some of the barriers, Cycle Sisters are opening up the world of cycling to their members, either for the first time or as returnees. One of the members took it up again after an absence of thirty-five years.

Member Jen joined her local group when a friend mentioned it. She initially felt unsafe on the roads but found the encouraging atmosphere and patience of her instructor helped. She is now qualified as a Cycle Sisters Ride Leader and regularly commutes by bike, finding her transport costs significantly reduced.

‘I was spending a lot of money on public transport and knew it would be a lot healthier if I could cycle…I built up to cycling the whole way.’

The charity points out that there is no religious reason preventing Muslim women from cycling and has worked with several mosques. Though they aim to ensure the needs of Muslim women are met, they are open to all and promote inclusive and sociable riding.

Looking ahead, Cycle Sisters would like to achieve their goal of expanding into a country-wide network, ensuring that Muslim women cyclists have a voice at the national level. They are currently inviting applications from groups of 3-4 women who are keen to set up groups in their own London boroughs.