The buses will be the first of their kind in England and will produce no air pollution from their exhausts.

The only by-product is water from the chemical reaction of hydrogen with oxygen from the air, a process that produces the electricity needed to power the bus.

The hydrogen from the buses is a by-product of an industrial chlor-alkali plant, but according to the Mayor, from 2023, the hydrogen will be even greener and will be produced by electrolysis powered by an offshore windfarm.

The buses will be initially be introduced on route 7 between East Acton and Oxford Circus. 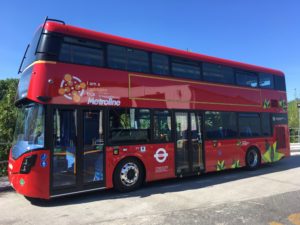 Sadiq Khan, the Mayor of London will today visit the Perivale bus depot in Ealing to see the new buses and refuelling stations.

Sadiq Khan, said: ‘We have made real progress in London to clean up our air, but we still have a long way to go because toxic air pollution in our city is still leading to thousands of premature deaths every year and is stunting the growth of children’s lungs. As part of our world-leading ongoing efforts, I’m proud to announce England’s first hydrogen double-decker buses, which don’t produce any harmful emissions, will now be put into service.

‘Our investment in these hydrogen buses is not only helping us to clean up London’s air but is supporting jobs and local economics across the UK. This is a great demonstration of how tackling air pollution and the climate crisis and boosting economic growth is about regions working together, investing in the very latest technology.’

‘I’ve worked hard to ensure TfL’s entire core bus fleet across London now meets the ULEZ standards, and this includes 500 electric buses. Our new investment in hydrogen buses will move us even closer to our ambition of making all London buses zero-emission by 2030.’

“The hydrogen from the buses is a by-product of an industrial chlor-alkali plant, but according to the Mayor, from 2023, the hydrogen will be even greener and will be produced by electrolysis powered by an offshore windfarm.”
What happened to the H2 refueling hardware installed to support the first generation single deck H2FC buses that TfL scrapped in March 2020? The H2 from the chlor-alkali process has a GHG footprint of 2-9kg GHG per kg of H2 (depends on plant energy source) – not to mention other AQ emissions. So what is the actual GHG saving and AQ benefit of these H2FC vehicles?