The fine, which has been issued by the EU is based on the fact that the manufacturers colluded to limit the development and rollout of car emission-control systems.

Shazia Yamin, partner at Leigh Day, the law firm representing over 90,000 UK drivers against motor manufacturers said: ‘This is the first time that the Commission has concluded that collusion on technical development amounts to a cartel’

The car manufacturers held regular technical meetings between 2009 and 2014 to discuss the development of technology that removes NOx emissions from diesel passenger cars through the injection of urea into the exhaust gas stream.

All parties acknowledged their involvement in the cartel and agreed to settle the case. 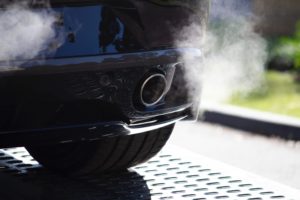 Margrethe Vestager, the executive vice-president of the Commission, in charge of competition policy, said that even though the companies had the technology to reduce harmful emissions beyond legal limits, they avoided competing and denied consumers the chance to buy less polluting cars, which is illegal.

Ms Vestager said: ‘Manufacturers deliberately avoided to compete on cleaning better than what was required by EU emission standards. And they did so despite the relevant technology being available.’

Shazia Yamin added: ‘This is the first time that the Commission has concluded that collusion on technical development amounts to a cartel, and so this represents a landmark moment.

‘The Commission has made clear that the manufacturers involved had the technology available to reduce harmful emissions to levels lower than required under the law but avoided competing to do so.

‘When this behaviour is viewed alongside the allegations of emissions test cheating levelled at these manufacturers, it is apparent that they have shown a total disregard of the harmful effects that excess vehicle emissions have on the environment and human health. The fine imposed sends a clear message that such actions will not be tolerated and is to be welcomed.’