Under the new Fit for 55 plan, the European Commission will now allow fuel suppliers to count biofuels in their renewable energy targets.

T&E has raised concerns that this high target could leave oil companies using resources like palm residues or crude tall oil (from wood pulp) and that this could lead to accelerated decarbonisation.

Without a clear framework on how ‘green’ hydrogen and e-fuels will be defined, the campaigners have warned that there is a heightened risk that they could be developed using fossil fuels. 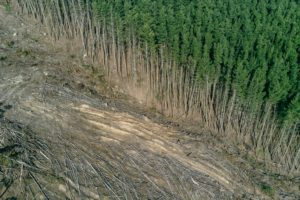 Laura Buffet, energy director at T&E, said: ‘The EU is failing to right the wrongs of a disastrous green fuels policy caused by heavy reliance on crop biofuels. This mistake is compounded by the decision not to bring forward the end date for support to palm oil biofuels, as some member states have done.”

‘We welcome the introduction of a system that rewards fuel suppliers for using renewable electricity as a transport fuel, and not only blending biofuels. This change reflects the growing electrification of transport and will help move the EU’s green fuels law away from the exclusive reliance on biofuels. But the EU must ensure it strengthens this system while ending support to crop biofuels.’