Campaign urges fleet operators to turn off their engines

A new anti-idling campaign is urging fleet operators to turn off their engines while parked.

Idling Action’s ‘Engine’s Off’ campaign, which is funded by the Mayor of London’s Air Quality Fund and is jointly led by Camden Council and the City of London Corporation, is making fresh calls for fleet operators and businesses to prevent pollution from idling vehicles.

Idling Action is working with organisations, encouraging them to pledge a meaningful commitment to reduce air pollution by ending idling.

By using free online education resources, Idling Actions aims to engage with drivers and employees by encouraging them to publicise their commitment and to demonstrate best practices to others.

One of the first businesses to take the Engines Off pledge was Marston Holdings.

According to Nick Ruxton-Boyle, the company’s director of environment: ‘As part of our pledge, we have implemented an engine idling policy and educated colleagues on the importance of avoiding idling whilst commuting or operating vehicles on the company’s behalf.

‘We are also supplying an increasing number of local authorities with both fully electric and low emission vehicles enabling them to demonstrate that they are serious about tackling air pollution and climate change.’ 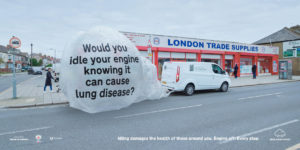 ‘We urge organisations whose operations involve fleets, professional drivers, or employees who travel by car to work in London, to educate and encourage their drivers to act on idling. This will help save lives and protect outdoor workers from toxic air.’

This campaign should become national as air pollution is causing deaths, and so it is a human rights issue.

This is a Nice Blog, Thanks For sharing your knowledge!! Once Have a look at Autoparts-miles.com
to get best deals up to 25% off on Used Saab Engines.