Transport for Greater Manchester (TfGM) has unveiled a new map of the upcoming cycle hire scheme.

Once complete, the 24/7 Bee Network will be one of the largest docked systems outside of London. The scheme is part of Greater Manchester’s plan to provide a fully integrated public transport system and become carbon neutral by 2038.

A closed trial of 30 bikes will commence from November 3. By June 2022, total bike numbers will be up to 1,200 pedal bikes and 300 e-bikes, with more than 200 docking stations across the zone. The first cohort of docking stations will be installed from October.

All of the bikes will be fitted with Manchester’s signature bee symbol so they are easily identifiable for people across Manchester, Trafford and Salford.

Docking stations will typically be between 300-500 metres apart, with the aim to ensure that up to 198,000 residents are never more than a five-minute walk from a Bee Network Bike. 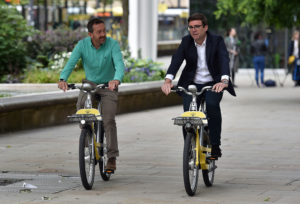 Andy Burnham, Mayor of Greater Manchester, said: ‘We’ve worked hard with our supplier to ensure the GM cycle hire scheme is affordable and accessible for residents to use.

‘In fact, we have reduced the tariffs, making our pedal bikes brilliant value when compared to similar schemes in the country.

‘The first Bee Network Bikes, with our signature Bee emblazoned on the side, are going on the ground later this year and we are very excited about our residents giving them a try.’

The locations of all the docking stations will be confirmed in the coming months and plans for a phase two should see the scheme expand further out of the regional centre.