Pollution from freight traffic disproportionately impacts communities of colour across the U.S, according to a new study published by the American Geophysical Union.

The researchers used high-resolution air pollution data to track nitrogen dioxide (NO2) pollution for nearly two years in 52 major cities across the U.S.

They then paired this data with both demographic data and metrics that analysed the degree of racial segregation in the given community.

They found that cities with bigger populations tended to have larger disparities in NO2 pollution between low-income neighbourhoods of colour and high-income white neighbourhoods.

Phoenix, Los Angeles and Newark, all had the highest NO2 inequalities, all with a discrepancy in NO2 exposure of over 40%. 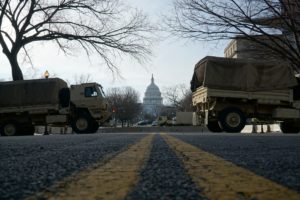 Angelique Demetillo, an atmospheric chemist and lead author of the study said: ‘One of the novel things we looked at was the integration of segregation metrics and air quality.

‘Previously, we had been limited in our ability to address air pollution inequality, but with improvements in satellite resolution we are now able to get spatially and temporally continuous data at finer resolutions within cities.’

The study also found that diesel trucks were the dominant source of pollution, contributing on average up to half of a city’s NO2 despite being at most 5% of traffic.

The authors found that a 60% drop in heavy trucking on weekends results in a 40% decrease in air pollution inequality.

‘In terms of environmental justice, one of the things we have lacked is these observations across an entire city that also have temporal variability that we can use to understand the sources [of pollution],’ said Sally Pusede, co-author of the study.

‘We have these new data and methodologies that continue to show us what we already know through experience, but in the U.S., it’s [quantitative] data that informs policy,’ she added.