Air pollution has reached high levels in a number of areas of the UK today (February 19), according to the latest data from the Department for Environment, Food and Rural Affairs.

The main pollutants of concern are particulate matter PM10 and PM2.5 as a result of a period of settled weather with light winds in the UK and a recirculation of air over northern Europe, the department said. 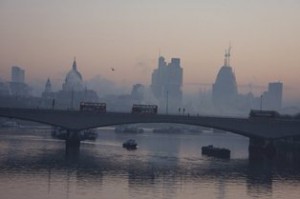 Photo of London smog this morning (Feb 19) amid high pollution throughout the UK (Photo: Simon Birkett)

Concentrations of PM10 have been monitored at high levels in Nottingham, Birmingham, Leeds and Dundee, with levels even reaching nine at the West Lothian Newton site in Scotland.

At a roadside monitoring station in Downpatrick, Northern Ireland (NI), levels of nitrogen dioxide were also monitored at very high levels, reaching a top-of-the-scale peak of ten, according to the NI Air website.

Similar levels are forecasted over the next 48 hours in England at built up and roadside locations and also some rural locations.

In London, high and moderate levels of particulate matter have been monitored at various sites throughout the city since Friday (February 15), leading campaigners to call for the UK government and the Mayor to issue smog warnings.

A spokeswoman for Defra said: “Pollution levels fluctuate according to the weather – still conditions especially can cause higher levels of pollution to build up. This is expected to change as our weather patterns alter. People with underlying health conditions who may be affected by poor air quality can keep up to date via Twitter alerts and from our air quality website which is updated hourly.”

She added: “We want to keep improving air quality and reduce the impact it can have on human health and the environment. Our air quality has improved significantly in recent decades and is now generally very good, and almost all of the UK meets EU air quality limits for all pollutants.”

In London, pollution levels have been regularly monitored at moderate and high levels on the London Air website since the weekend.

At the Woolwich Flyover site in Greenwich and on Gunnersbury Avenue in Hounslow and Ealing, PM10 was monitored at high levels (seven on the scale). A significant number of other sites in London also monitored levels at four, five and six on the scale.

An episode of high and moderate levels was also monitored in London between 12 and 14 February.

Clean Air in London (CAL) campaigner Simon Birkett called on the government to better inform the public of episodes of high pollution in the UK.

He said: “We need the Government to issue a national press release warning of smog and the Mayor to do the same for London.”

He added that it was “time for action” as the government had not issued a smog warning since April 2011.

King’s College London’s Environmental Research Group (ERG), which runs the London Air site, said it was likely that current conditions would persist throughout the week due to easterly airflow, with the possibility of high levels also occurring alongside heavily trafficked roadsides and near industrial sites.

The ERG said: “Elevated particulate levels recorded on Friday and Saturday morning may have been from a local source or as a result of poor dispersion of particulates from the earlier episode (February 12-14), indicated by the relatively low volatile content and higher proportion of coarser particles. A change in wind direction on Sunday morning has again led to a greater influx of pollution from the continent with air arriving over the region that has travelled at relatively low altitudes across Poland, Germany, the Low Countries and northern France before arriving in the UK.”

Health advice on the London Air website states that during high pollution episodes, older people and those with respiratory problems should reduce physical exertion. It also recommends that anyone else experiencing discomfort such as sore throat, sore eyes or coughing should consider reducing their activity, particularly outdoors.

A regularly updated pollution forecast for the UK is available on the Defra website.