The EU’s review of its air quality policy is one of four key environmental initiatives for the European Commission in 2013 and 2014, environment commissioner Janez Potočnik has announced.

In front of various national legislators in Europe as part of the EU Committee for European Affairs and the Committee for Sustainable Development in Paris on Wednesday (March 3), Mr Potočnik outlined Europe’s environmental priorities for the next two years. 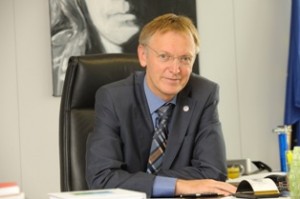 Environment commissioner Janez Potočnik was speaking in Paris this week

One of these priorities is the EU’s ‘Year of Air’ in 2013, which will see a report on European air quality policy issued in September 2013 following a public consultation earlier this year.

Mr Potočnik emphasised that tackling air pollution in Europe through improved legislation was key to economic growth as well as improving the health of European citizens.

“In Europe, each year, 400,000 people die prematurely because of air pollution,” he said. “This situation needs to change. One should not forget that air pollution also affects businesses and public budgets due to lost working days as well as the cost of health care on pollution-related diseases.”

He added: “Preventing damage to the environment generally costs far less than the cost of repairing the damage later.”

The environment commissioner also highlighted the need to tackle the breach of EU air quality limits by many member states, over which the UK government is currently being challenged in the UK Supreme Court by campaign group ClientEarth (see airqualitynews.com story).

He said: “Despite major improvements, exceeding air quality standards continues to be widespread and we need to address this.”

Speaking in Paris, Mr Potočnik also praised a new national package of 38 measures to tackle air quality in France, as he said there were 40,000 premature deaths per year due to air pollution in the country.

“I welcome the emergency approach to air quality announced by the French government in February,” he said.

At the heart of his speech was an emphasis on the key role for individual member states in tackling environmental issues alongside economic growth and setting realistic targets.

“Being in daily contact with your constituencies and local situations, you can ensure that the sense of realism and feasibility are kept high in environmental policy-making,” he said.

It follows comments by the commissioner in March that EU law alone was “not sufficient” to tackle air quality in Europe (see airqualitynews.com story).

The other key initiatives outlined in the speech involved coupling sustainable development with tackling poverty, putting in place a framework for shale gas extraction, and preparing for a comprehensive EU policy package on waste in 2014.

Closing the speech, Mr Potočnik said: “We are living through difficult and challenging times. Long-term thinking is not often rewarded, and that is particularly true in the current economic climate. But we must not lose sight of our aims. The decisions we take now will influence for decades how the environment can provide services in a way that is more sustainable and, at the same time, be a source of innovation and growth.”

The speech is available in full on the European Commission website.