Stronger European Union (EU) air pollution policies may be needed as the impacts of poor air quality on human health are worse than previously thought, according to a World Health Organisation (WHO) report.

Published on Wednesday (July 3), the WHO technical report ‘Review of evidence on health aspects of air pollution – REVIHAAP Project’, looks at air pollution evidence collected since a previous version of the report was issued in 2005. 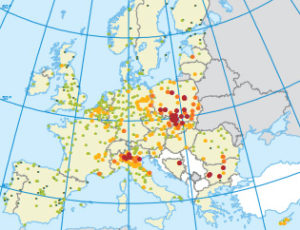 Map showing annual mean concentrations of PM2.5 in Europe in 2010 (red dots signify the highest levels of pollution) – the WHO review found particulate matter levels to have health impacts at lower concentrations that previously thought

Carried out by 60 international scientists, including air pollution scientists from King’s College London, the review collates information from eight years’ of epidemiological studies and forms part of the discussions in the EU’s review of its air quality policy, on which a report is due in September (see airqualitynews.com story).

According to the review, diabetes has been added to the existing list of respiratory and heart disease effects in adults from air pollution, while evidence has also shown additional links between asthma and long-term exposure to poor air.

Furthermore, air pollution has been found to impact on neurodevelopment and cognitive functions in children, as well as babies born to pollution-exposed mothers.

The effects of air pollution can also be worse during very hot periods of the summer, which is also associated with climate change in Europe.

Scientists reviewed evidence on a number of harmful air pollutants, including nitrogen dioxide, particulate matter PM10 and PM2.5, ozone, sulphur dioxide and others.

The review found further evidence that long and short-term exposure to particulate matter and nitrogen dioxide can damage health at lower levels of exposure than previous evidence in the 2005 WHO review found.

It suggests that WHO’s own air quality guidelines for nitrogen dioxide, which are generally stricter than EU legal limits, should therefore be updated.

According to the report: “The results of these new studies provide support for updating the 2005 global update of the WHO air quality guidelines (WHO Regional Office for Europe, 2006) for NO2.”

She added: “The new findings show effects at lower concentration levels and associations with new conditions, such as diabetes, adverse birth outcomes and cognitive development. They provide evidence-based science that EU policies are inadequate.”

His comments come after the UK Supreme Court ruled in May that the government was failing in its legal duty to tackle air pollution (see airqualitynews.com story).

He said: “The Supreme Court has already ruled that the government is failing in its legal duty to meet EU air quality standards, and now the WHO is telling us that even those standards need to be much stricter to protect our health. What more will it take?”

Mr Andrews said the UK government needed to act urgently to tackle this “public health crisis” and “uphold our right to clean air”.

He added: “The government needs to act at home to tackle carcinogenic diesel fumes, by far the biggest source of pollution, and work with the EU to make sure it delivers laws which adequately protect our health.”

The REVIHAAP report is available on the WHO website.